Aka Marriage a la Mode. What are you? Who the devil are you? When William Egerton (Rex Harrison) aka Charles Hathaway Peter, Pietro and Bill, emerges from a lengthy period of amnesia to find himself in a hotel in Wales. He retrieves a trunk of his belongings from a station and finds evidence that he was a conman and a serial bigamist. A professor of psychological medicine Llewellyn (Cecil Parker) helps him to start piecing his life back together but William discovers he has been married to seven women all over the country – at the same time. He is pleased to find that he is married to a lovely fashion photographer Monica Hendricks (Kay Kendall) in London, but when he goes to his office at the Munitions Ministry to ask his boss for sick leave, he is thrown out as a stranger. He is also persona non grata in his club, since he pushed a waiter over a balcony. He is kidnapped by the injured waiter (George Cole) and learns that he was also married to the waiter’s relative Lola ( ) who is now a circus acrobat, and whose Italian family run a restaurant. He is arrested and tried, and, ignoring his female barrister Miss Chesterman’s (Margaret Leighton) case for the defence, admits his guilt and asks to go to prison for a quiet life away from all his wives, who all want him back. On leaving prison he is still sought by his wives as well as by his barrister … I am beginning to be seriously concerned about my character. Director Sidney Gilliat and Val Valentine’s screenplay is an exercise in caddish charm, capitalising on the persona (on- and offscreen) of Harrison who had successfully essayed the type in Gilliat’s A Rake’s Progress, a decade earlier. As the women pile up, his dilemma worsens and the potential for criminal charges exponentially increases.  The lesson if there is one in this farcical narrative is a kind of redemption but the ironic outcome has our hero simply running away from the imprisonment of marriage into a real prison: all the while these women cannot control their attraction to him. Male wishful thinking? Hmm! The witty, literate script comes to a head in an hilarious courtroom scene in which Harrison agrees with the prosecution’s characterisation of the dingy exploits of a shopworn cavalier; while Leighton bemoans sexism in the court yet falls for her hopeless client; and a lawyer wonders at the supportive wives, The same again is every woman’s ideal  –they’re gluttons for punishment. This skates between a wry play on Harrison’s lifestyle and outright misogyny.  Zesty, funny and played to the hilt by a fabulous cast of familiar British faces. The meta-irony is that Harrison commenced an adulterous affair with the fabulous Kendall, whom he married. Think of all your morbid fancies of yesterday – then look at this! 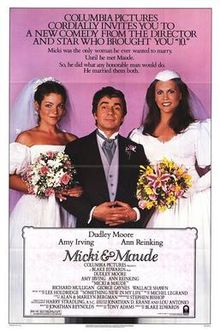 I’m so hung over my head feels like a tuning fork. TV reporter Rob Salinger (Dudley Moore) desperately wants to be a father but his ambitious lawyer wife Micki (Ann Reinking) wants to be a judge and hasn’t time for a baby just now. When Rob has an affair with beautiful cellist Maude (Amy Irving) she shocks him when she informs him she’s pregnant and he determines to divorce Micki. But at the dinner he’s arranged to break the bad news Micki announces she’s finally pregnant and has to be on bed rest for the duration of the pregnancy.  Rob doesn’t want to ruin things so he marries Maude, pretending that he’s divorced Micki and lives with both women bigamously until their anticipated due dates coincide and they give birth in neighbouring suites at the same hospital … When Daddy retires he’s going to take up decorating full time. Blake Edwards’ marital comedy is heartwarming and funny and depends upon his usual quotient of farce although that is mostly confined to the final trimester of this battle of the sexes outing. John Pleshette is Rob’s TV director, looking and sounding not a little unlike Edwards himself;  Edwards’ ensemble regular Richard Mulligan plays Rob’s best friend, his TV producer; Wallace Shawn is a doctor; and there’s a wonderful Meet the Parents sequence when Rob is introduced to Maude’s father, Barkhas Guillory (H.B. Haggerty) a mean-looking wealthy wrestler who’s surrounded by much bigger colleagues like André the Giant. And he wants to buy the couple a house in the Hollywood Hills that he plans to decorate himself. In a film that could be purely stereotypical, this is turning some tropes upside down. And, in time-honoured fashion befitting a comedy expert, Edwards brings it all to a very satisfying, sincere conclusion, helped by Moore’s sweet performance as the politest bigamist in town. Great fun. Written by Jonathan Reynolds. It won’t get the fat gene

Aka Both Sides of the Law. Coppers in skirts. Pity they haven’t got something better to do.  Two London policewomen based at Sloan Street in Chelsea go about their daily lives involved in cases of child endangerment and larceny.  Sgt Pauline Ramsey (Rosamund John) and WPC Susan (Anne Crawford) deal with a woman Edna Hurran (Eleanor Summerfield) who’s rescued a boy from drowning. The surrounding publicity means she has to return to the Army from which she went AWOL to marry sickly David Evans (Ronald Howard) and must pay the price – until a reward is given to her and the newspaper story triggers the return of her first husband looking for a share:  they never divorced. A toddler wanders out on the ledge of her tenement building several storeys up. There are tense moments as Pauline saves her and then ruminates the possibility of adoption as her own child and husband were killed in a car crash and she thinks motherhood would be a better alternative to work. Then Susan finds the child’s mother, now remarried.  Shoplifter Bridget Foster (Peggy Cummins) faces a £5 fine and abandons her 15-month old son to her mother-in-law, taking up with Ray, a crim (Terence Morgan) who sees her at a nightclub. He’s involved in a heist on jewels  in a van and pawns them at Mr Muller’s (Charles Victor) but doesn’t like the price he gets and pays a return visit.  WPC Lucy (Barbara Murray) goes to get her hair done and spots Bridget which may lead her to the thieves … Jan Read’s story was adapted by Muriel and Sydney Box as a kind of followup to The Blue Lamp which had been a huge hit in England. Ostensibly a docudrama, this production cast well-known names as a kind of insurance policy – John was in several good films since wartime, while Cummins had made her name in America. There are some moments of humour in the police station – when an older woman reports a man following her, the Sergeant (male) remarks, ‘sounds like an acute case of wishful thinking’;  while a man in the raided nightclub says ‘my wife thinks I’m in Birmingham,’ which impresses precisely nobody.  There are interesting strands to the stories – the perceived fairness of the judiciary;  Muller’s experience of the Gestapo in Berlin which he likens to Morgan showing up pretending to be a policeman looking for a bribe; the issue of parenting – the child abuse of the toddler whose mother is now apparently uninterested in her welfare following her remarriage. Muriel Box’s direction is pretty rudimentary but her storytelling skill is evident and the conclusion, when all the stories are threaded together in a chase and courtroom and there is a satisfying drawing together of the various elements. How Morgan is caught is particularly good.  In the final scene sequence Cummins is outfitted in a beret so that she resembles the gangster’s moll she played in the incredible Gun Crazy but that film is in a different league to a more plodding police procedural, albeit its focus is on the female experience: working, single, marital, maternal, streetwise and otherwise.  Shot at Gate Studios, Elstree with some interesting location work on the streets of London which looks rather lacking in business in the era of rationing and is filled with blocks of modernist council flats. There’s an interesting score by Temple Abady and fun to be had spotting actors who would become better known, principally through TV roles:  Michael Medwin, Michael Hordern and Thora Hird.

Suppose Mr Arden’s wife came back, like Irene Dunne done. Did. Five years after her disappearance at sea, Nicky Arden (James Garner) is in the process of having his wife declared dead so he can marry his new fiancée Bianca (Polly Bergen) when Ellen (Doris Day) materialises and the honeymoon is delayed but Nick finds out Ellen wasn’t alone on the island after the shipwreck after all …  A remake of one of the greatest screen comedies starring two of my favourite people? You had me at hello! This got partly remade as Something’s Got To Give with Marilyn Monroe and Dean Martin but got put on hold.  Her premature death led to this iteration of Enoch Arden and My Favorite Wife, which was written by Samuel and Bella Spewack and Leo McCarey (upon whom Cary Grant modelled much of his suave screwball persona for their collaboration on The Awful Truth, another ingenious marital sex comedy.) Arnold Schulman, Nunnally Johnson and Walter Bernstein reworked that screenplay for the Monroe version (she agreed to star in it because of Johnson, and then George Cukor had it rewritten which upset her greatly); and then Hal Kanter and Jack Sher wrote this.  We can blame Tennyson for the original. The set for the Arden home was the same from the Monroe version and it was based on Cukor’s legendarily luxurious Hollywood digs. We even get to spend time at the pool of the Beverly Hills Hotel. Garner and Day are brilliantly cast and work wonderfully well together, making this one of the biggest hits of its year (it was released on Christmas Day). They had proven their chemistry on The Thrill of it All and make for a crazy good looking couple. With Thelma Ritter as Nicky’s mom, Chuck Connors as the island Adam, and Don Knotts, Edgar Buchanan and John Astin rounding out the cast, we’re in great hands. The title song, co-written by Day’s son Terry Melcher and arranged by Jack Nitzsche, was a monster. Terrific, slick, funny blend of farce and sex comedy, this censor-baiting entertainment is of its time but wears it well. Directed by Michael Gordon.

Are you putting a whole fist up there Doc? Irwin Fletcher (Chevy Chase) is an undercover reporter doing a drugs story while disguised as a homeless junkie on the beach when he’s approached by businessman Alan Stanwyk (Tim Matheson) to kill him for $50,000 because he’s got bone cancer. Fletch identifies himself as Ted Nugent. He then investigates this fascinating proposition, donning a myriad of disguises and identities (we particularly like the 49c teeth), getting mired in Stanwyk’s marital disarray, property deals, police corruption involving Chief of Police Karlin (Joe Don Baker) – and murder. And he gets to know Alan’s LA wife Gail (Dana Wheeler-Nicholson) in a mutually satisfying fashion. Win! Gregory Mcdonald’s novel gets a fast-moving adaptation from Andrew Bergman, a director in his own right (there was some additional uncredited work by fellow writer-director Phil Alden Robinson.)  Chase gives the performance (or performances) that you’d expect – droll and deadpan, always amiable (yet plucky!) and the running joke about his bizarre expense claims is well done. Fine, funny lighthearted fare handled with his customary aplomb by director Michael Ritchie, energised by a typically zippy plinkety-plonk score from Harold Faltermeyer, the go-to composer for zeitgeisty mid-Eighties entertainment. Chase even dons an Afro to play basketball with Kareem Abdul-Jabbar. There’s a wonderful supporting cast including Geena Davis in the newsroom, David Harper (of The Waltons!) as ‘teenager’ and Kenneth Mars:  we are thrice blessed!