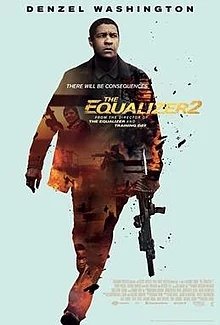 A piece of advice: always be nice to anyone who has access to your toothbrush.  Retired elusive ex-CIA operative, widower Robert McCall (Denzel Washington), is whiling away his time driving a taxi and delivering vigilante justice on behalf of neighbours and customers in Boston. However his past cuts close to home when thugs kill Susan Plummer (Melissa Leo) – his best friend and former colleague. Now out for revenge, McCall has to take on a crew of highly trained assassins who’ll stop at nothing to destroy him and he suspects their leader is a former colleague…  There are no good or bad people any more. No enemies. Just unfortunates. Per the law of diminishing returns, the more of these actioners Washington makes the less effective he becomes as a leading man, doesn’t he? In the first of these films, adapted from the Edward Woodward TV series, he was outshone by the astonishing Marton Csokas, who was the villain par excellence, albeit for obvious reasons he’s not back here. McCall is still working out his grief by helping out anyone he can like some kind of Fury or ninja empath. You’ll spot the troublemaker a mile off and the final shootout is inevitable and tedious. Director Antoine Fuqua has now made sadism a part of his aesthetic brand without any especially redeeming features other than the resolution of an underdeveloped subplot – care home resident Orson Bean trying to find a painting stolen from his family by the Nazis, a line of narrative mirrored in the aspiring artist who McCall is trying to direct back to the straight and narrow starting with remaking a piece of Islamic street art. Written by Richard Wenk. You died