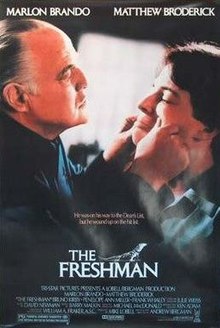 I had been in New York nineteen minutes and eleven seconds and I was already ruined. Kansas/Vermont/Montana boy Clark Kellogg (Matthew Broderick) is robbed moments after arriving in New York to study film at NYU. When he sees his mugger Victor (Bruno Kirby) through a window several days later during a meeting with his tutor Fleeber (Paul Benedict), he confronts him. Victor promises to return his property and get him a job with his uncle, Carmine Sabatini (Marlon Brando), who turns out to be a Mafia boss. Clark can’t help but notice his uncanny resemblance to The Godfather. His first job (for $500!) is to pick up a komodo dragon from a lot in New Jersey which escapes at a gas station when his roommate Steve (Frank Whaley) opens the car door to smoke. The dragon runs amok in a mall. When Clark tells his mom on the phone about his new job his environmental activist stepdad Dwight (Kenneth Welsh) overhears. Carmine has lined up his daughter Tina (Penelope Ann Miller) to marry Clark. As Clark continues his shady work for Carmine, he discovers an elaborate underworld that has caught the attention of the authorities. He’s chased by men from the Department of Justice who are particularly interested in the wildlife Carmine is importing and he’s persuaded to become an informer. As things come to a head, not everything is what it seems. The endangered species are being prepared for a deluxe meal at a gourmet club where Carmine fleeces the rich for millions … I was once asked at a dinner party what I thought of Bergman. I responded, Ingmar or Andrew? Because that’s the kind of all-round entertaining dinner guest I am! In truth I’ve always enjoyed Andrew Bergman’s movies – they never fail to engage or amuse and this is no different. In fact I’d forgotten just how hilarious this is. You ain’t seen nothing till you’ve seen Brando on ice skates. This is a genuinely funny spoof with lots of endearing performances and a couple of artfully chosen excerpts from a certain pair of classic Mafia movies serve as commentary on the narrative that pastiches them. And if you have ever taken a film studies class you will get a kick out of Benedict’s painfully apt role as the self-obsessed lecturer. Brando is quite brilliant parodying himself and Broderick even out-Ferrises himself in some scenes. Great fun.

I used to work in a restaurant. The worst the chefs did was race the lobsters on the floor before boiling them to death. Here? Not so much. Chef. Adam Jones. Burnt. They couldn’t decide what to call this and Jon Favreau’s funny cooking film used the first one. Was this supposed to be a comedy? About a narcissistic egomaniacal sexually irresistible angry violent drug addict running a Michelin-starred kitchen? I barely trust injecting junkies to record music. And I don’t have to eat anything they’ve touched. So Bradley Cooper (sporting his French) winds up in London to make amends with everyone he screwed over in Paris (they’ve all taken the pre-Brexit Eurostar) to get a third star in Daniel Bruhl’s hotel (the Langham, if you want to avoid it). He’s spent the interim shucking a million oysters in N’Oleans. It’s like assembling a gang for a heist. Except it’s not that good but we know they’ve all got a bone to pick with him. Maitre d Bruhl is in love with him. Of course he is! Emma Thompson is the psychotherapist drug testing him every week passing messages from Bruhl. Very professional. And he hires Sienna Miller whom he wants to turn into another version of himself, an angry perfectionist – who also has to fall in love with him because she’s a divorcee with a sassy kid. And her revolution in his kitchen is boil-in-the-bag fish to seal in the flavours (I’m afraid a certain frozen food company got there before her). Matthew Rhys is the rival chef going crazy in another restaurant while they clamour for critical acclaim. Uma Thurman is the Lesbian food critic (and she’s good.) But dialogue reveals that even she hasn’t been capable of resisting him.  There are a lot of cooking montages. A former girlfriend and fellow cleaned-up junkie Alicia Vikander turns up. She’s the daughter of the restaurateur whose place he screwed up. She used to be in love with him. Quoi d’neuf?! His debt collectors turn up the night they think Michelin men have arrived.  Adam Jones has no redeeming qualities whatsoever. There is a lesson learned but it’s too much to regurgitate. This is what could be called an equal opportunities offender. Mercifully it’s just 96 minutes long because whatever director John Wells and screenwriter Steven Knight (from a story by Michael Kalesniko) had in mind it didn’t make it through the editing. Or, worse – maybe it did. This is Cooper trying to re-make Kitchen Confidential – which was cancelled on the small screen. (You’re an actor with producing chops so you ask yourself:  would Beatty/Redford/Cruise make this? No!)  I worry in hospitals that I need an AIDS kit to test the doctors who don’t wash their hands and splash blood everywhere. Now restaurants too? Definitely not for vegetarians. I’ve lost my appetite.