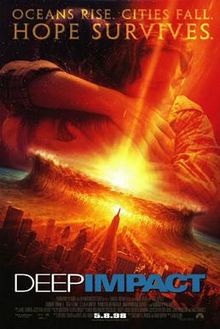 This is not a videogame, son. One year after teenage astronomer Leo Biederman (Elijah Wood) spots a comet the size of Mount Everest heading for Earth, journalist Jenny Lerner (Téa Leoni) mistakes the scoop of a lifetime for a story about the mistress of the US President Beck (Morgan Freeman). Once she’s allowed into the loop of the Extinction Level Event with the rest of the press pack she finds that with one year to go before it could hit the planet there’s a plan to build a system of caves while a joint US/Russian spacecraft nicknamed Messiah being led by veteran astronaut Captain Sturgeon Tanner (Robert Duvall) is going to try to intercept its path with nuclear weapons … People know you. They trust you. A disaster movie par excellence, this mixes up men on a mission and race against time tropes with ideas about God, friendship, family and the all-pervasive sense of doom that settles upon people learning of an entire planet’s imminent destruction and how they deal with it. Leoni doesn’t quite have the expressivity to offer a mature performance although her particular role is buttressed by the subplot of her unhappiness at her father Jason’s (Maximilian Schell) new marriage while her beloved mother Robin (Vanessa Redgrave) suffers. However the entire drama is well structured and tautly managed. Written by Bruce Joel Rubin and Michael Tolkin (as a vague remake of When Worlds Collide, 1951) and expertly handled by Mimi Leder, better known for TV’s ER, some of whose alumni feature here. Let’s go home