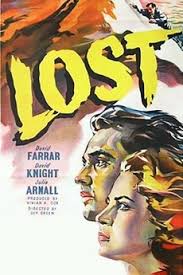 Aka Tears for Simon. I didn’t neglect my baby. U.S. Embassy employee Lee Cochrane (David Knight) and his wife Sue (Julia Arnall), receive a shock when they discover that their 18-month-old son, Simon, has disappeared in London from Kensington Gardens. He was last seen with their nanny, and the couple seemingly have no leads that might help police Detective Inspector Craig (David Farrar) in his investigation but the pages of a popular novel might provide a useful lead that involves several staff members to look for a clue. The media sensationalises the incident, causing an unnecessary distraction as the couple prepares to confront the culprit face-to-face when they get a series of phonecalls despite warnings not to give a ransom as time is running out … Can a career woman be a mother as well? That’s the tabloid headline screaming from a newspaper article that Sue agrees to be interviewed for in order to secure publicity for her missing son – and that’s what a woman journalist writes about her. The screenplay by the estimable Janet Green never ignores the gender-baiting of the era in this punchy thriller which allows ample time for Sue to shed tears and do anything she can to save her child while she loses it psychologically too. Farrar is his usual tough and brusque character but there are some good jibes about his bachelorhood in an office boasting a female Sergeant (Meredith Edwards). Everley Gregg (a favourite actress of Noël Coward) has a great bit as a Lady who likes cars; while Thora Hird, Mona Washbourne, Joan Sims, Joan Hickson, Barbara Windsor and Shirley Anne Field all make appearances. The parallel investigation narratives – by the police and the parents – are well intertwined and converge in literally a cliff-hanging ending. Shot by Harry Waxman, edited by Anne V. Coates and directed by Guy Green. You have a genius for the obvious