You know what this is, don’t you? A time-space warp! The Williams family headed by Richard (Chris Mitchum) and Beth (Marcy Lafferty) with son Steve (Scott Kolden) and daughter Jenny (Natasha Ryan) relocates to the Sonoran Desert to be close to grandfather Grant (Jim Davis) and grandmother Ana (Dorothy Malone) in their solar-powered home.  Three supernovae explode simultaneously, aliens build something behind the barn, a UFO lands in the hills and a miniature extra-terrestrial befriends Jenny telepathically. Because this desert home is in the middle of a time vortex that lures aliens to warn them of earth’s imminent destruction. When said aliens then touch down and fight among themselves outside the house, the family escapes but becomes separated while Beth and Jenny disappear and the next day everyone finds they are actually thousands of years in the future… For a while the whole galaxy was turned upside down. Home movie level acting even with Malone’s starriness, shonky effects and a mercifully short running time (79 minutes) make for an amusing diversion and a pleasing reminder of life when Atari games seemed positively other-worldly. A trip, of sorts. Sigh.  There is an elegant score by Richard Band. Written by J. Larry Carroll, Steve Neill, Wayne Schmidt and David Schmoeller.  Directed by John Cardos. Maybe this was all meant to be

I’ve been trying to keep you from harm all along. Five criminals are recruited by the Confederacy for a dangerous mission in exchange for a pardon. The men – John Morgan Candy (Bob Campbell), William Parcel Candy (Jonathan Haze), J.C. Haggard (Paul Birch), Hale Clinton (Mike ‘Touch’ Connors) and Govern Sturges (John Lund) – are to travel to Kansas to intercept a stagecoach carrying Confederate traitor and spy Stephen Jethro (Jack Ingram) and gold. When they realize that a woman (Dorothy Malone) is also present, it complicates their mission. She and her father are taken captive and things get very unpleasant when the men start fighting over her and one subjects her to an attempted rape … This is a fairly standard-issue oater which owes its distinction to the late Malone’s full-blooded, emotive performance. She owns every one of her scenes with her febrile approach and dominates the narrative. Her scenes with Lund – who is not the bad guy he appears – really enliven the story. Her appearance is almost totally Fifties – a full-bodied ponytail, emphatic embonpoint, white shirt and big black and white gingham skirt, lending her a kind of Grace Kelly-out-west aspect. Watch it for her – although you might also enjoy Connors as the psycho – he would become TV’s Mannix. Written by Robert Wright Campbell (who also appears as John Candy) and produced and directed by Roger Corman with cinematography by Floyd Crosby who would become a longtime collaborator. 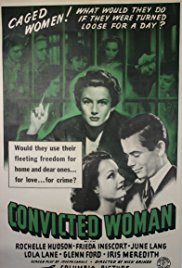 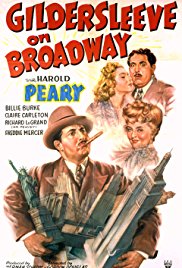 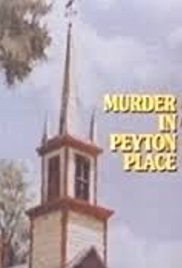 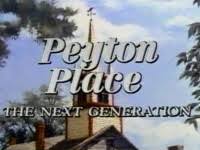 The stunning Dorothy Malone has died just short of her 94th birthday. She made a big impression on Humphrey Bogart’s Philip Marlowe in The Big Sleep as the sultry bookseller and was put into the usual array of westerns and B movies before she made the move to Douglas Sirk’s indelible florid melodramas:  she will forever be embedded in the collective consciousness as the oilman’s outrageously boozy sexpot daughter Marylee Hadley in Written on the Wind. He brought her back to work on what might be her finest dramatic role in The Tarnished Angels.  She spent much of the Sixties and Seventies in TV and was part of everyone’s life in Peyton Place as Constance Mackenzie.  She would return in two TV movies based on the characters over the next couple of decades. She was paid righteous homage in Basic Instinct, turning up in that essay on the Hollywood blonde as a childkiller whom Sharon Stone’s character befriends. What a woman. Rest in peace. 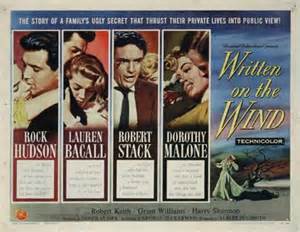 Thanks to UK’s Drama channel, Douglas Sirk’s cycle of 1950s American melodramas is being screened each Saturday (with commercial breaks, sadly) and the prints are pretty good!. This is the high point of the series, stylistically, thematically, dramatically. The cast is stunning, the music, sets, design and direction spectacular. If you need me to tell you that the staircase scene is a pinnacle of cinema then this is for you. A must-see classic. 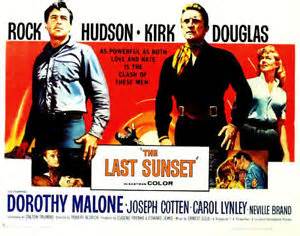 Douglas Sirk’s concoction of lust and forbidden actions were potent enough for Robert Aldrich to borrow two of his big stars and plant them in a western. Leonard Maltin’s Guide calls this Strange on the Range and it’s true that incest is not often featured in the genre. Add Kirk Douglas to the grouping along with rising star Carol Lynley (remember her and Brandon De Wilde in Blue Denim?!) and you have a time capsule of some degree of wonderment. The script was courtesy of blacklistee Dalton Trumbo (subject of a new biopic starring Bryan Cranston) whose career was resurrected spectacularly by star Douglas when he helped to have him credited for Spartacus (1960). The action is well handled by Aldrich, the tough guy director, while it is charming to hear Joseph Cotten continuously refer to ‘Virginia gentlemen,’ of which he was famously one.