In the beginning, God created the Heaven and the Earth. And the Earth was without form and void. And the Spirit of God moved upon the face of the waters. And God said, “Let there be light.” And there was light. The first 22 books of the Old Testament are dramatised in 5 main sequences:  Creation, narrated by God (John Huston);  Adam (Michael Parks) and Eve (Ulla Bergryd) meet and procreate;  Cain (Richard Harris) slays his brother Abel (Franco Nero);  Noah (Huston again) creates his ark for the animals and there’s a spectacular flood;  and Abraham’s (George C. Scott) story is recounted – his long life with the beautiful but barren Sarah (Ava Gardner), the conceiving of his only son Isaac, with Sarah’s maid, and his calling by God to make a sacrifice. There are two shorter sections, one recounting the building of the Tower of Babel;  and the destruction of Sodom and Gomorrah… Am I my brother’s keeper?  An awesome epic of tension-free tedium that is quite literally beyond belief with some (few) honourable exceptions:  director Huston himself, who also narrates this Italian-American co-production and makes for an amiable animal lover;  the lustrous Gardner;  O’Toole in his brief appearance as the Three Angels; and the final sequence in which Abraham comes closerthanthis to putting his only son Isaac on the BBQ instead of the more conventional sacrificial ram. Nero was the film’s still photographer until Huston spotted him and started his screen career. Adam and Eve’s nude frolics were choreographed by Katharine Dunham. Huston’s girlfriend Zoe Sallis features as Hagar. Notable for a score by Toshiro Mayuzumi with uncredited work by Ennio Morricone, this will have you reaching for your own traveller’s friend – it’s light work after this. The screenplay, on the other hand, is credited to Christopher Fry although Orson Welles and Mario Soldati also contributed something or other. There is nothing that He may not ask of thee?

You did not come here. You were led here by Our Lord. Sanctimonious Sister Mary Bonaventure (Claudette Colbert) is leading the team at the convent/hospital of Our Lady of Rheims, a hillside refuge for a community in Norfolk during a terrible flood. Her colleagues dislike her intensely – but Mother Superior (Gladys Cooper) knows that she is motivated by guilt over the death by suicide of her sister. When Valerie Cairns (Ann Blyth, the wicked daughter from Mildred Pierce) arrives accompanied by the police it takes a while for the penny to drop as to why she’s rejecting Sister Mary’s kindness:  she’s a murderess en route to the gallows at prison in Norwich. She’s due to be hanged the following morning but the breaking of the dyke and the downing of telephone lines now mean her execution is delayed. She insists on her innocence and Mary believes her – because she knows what guilt really is. There are a number of people at the convent who are hiding guilt relating to the death by overdose of Valerie’s crippled composer brother including the wife (Anne Crawford) of the doctor on duty (Robert Douglas) who reacts with shock to a photograph of the murdered man. Her husband promptly sedates her.  As Sr Mary researches the newspapers and is given an unsigned letter by slow-witted handyman Willie (Michael Pate) that implicates a third party in the murder, Sr Mary determines to bring Valerie’s fiance Sidney (Philip Friend) from Norwich by boat with Willie.  The handyman destroys the boat so that Valerie cannot be taken to be hanged. The police sergeant is now going to charge Sr Mary with interfering in the course of justice and the guilty party is closing in on her while she is reprimanded by Mother Superior … Slickly told, atmospheric thriller directed by Douglas Sirk with an unexpected take on the melodrama combined with an Agatha Christie group of conventional characters hiding something nasty all gathered in the one building.  There’s a marvellous scene in a belltower when the murderer reveals themselves. The contrasting figures of the desperate and hysterical Blyth and calm but determined Colbert make this a fascinating spin on a crime thriller with a play on the concept of divine intervention which would also be pivotal in Sirk’s later Magnificent Obsession. An engaging, stylish tale adapted by Oscar Saul and Andrew Solt from Charlotte Hastings’ play Bonaventure, enhanced by some very fine performances and sharp dialogue particularly when it’s delivered by Connie Gilchrist as the acerbic cook Sister Josephine whose insistence on saving newspapers (preferably The Sunday Times) saves the day. 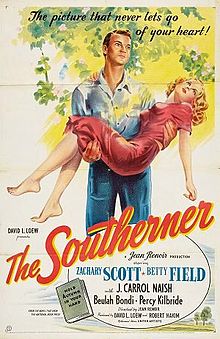 French master Jean Renoir’s American work may not be as lauded as his films in his native France, but this is a tremendously well told adaptation of a novel by George Sessions Perry, Hold Autumn in Your Hand,  not surprisingly when you see who wrote the screenplay:  Nunnally Johnson, Hugo Butler, William Faulkner and Renoir himself. Not too dusty. It’s the tale of the Tuckers, cotton pickers in Texas. Sam (Zachary Scott) and Nona (Betty Field), their kids Jot and Daisy, and his mother (Beulah Bondi) decide to start up their own farm with nothing but a mule and some seed. They need access to water so the neighbour Devers (J. Carrol Naish) reluctantly permits access to his own supply and after a freezing winter in which their son becomes seriously ill,  the feud escalates and involves Devers’ half-wit nephew. Devers finds Sam trying to find a huge catfish that he’s been after for years and they find a way to solve their differences. The general store owner (Percy Kilbride – Pa Kettle!) who’s refused the family credit now wants to marry Sam’s mother but a terrible storm and resultant flooding ruins their entire plot and they have to start over. This is a really great story, so well told, limpidly shot by Lucien Andriot in the San Joaquin Valley and beautifully characterised and performed by a splendid cast – it cannot be fairly described. It shouldn’t be overlooked in Renoir’s oeuvre because even if it’s not as iconic a cinematic text as The Grapes of Wrath it’s an economic and beautifully framed and shot slice of Americana and it was the director’s own favourite of his American films. Scott has never been better cast and Field is simply luminous. Bondi is … herself! Really affecting filmmaking.

This Children’s Film Foundation production is superb and not a little ruthless! Eight kids are stranded when a river breaks its banks not far from Ely in Cambridgeshire. Four of them are part of a rather posh farming family whose parents have taken off to hospital for the imminent birth of a new sibling. The flood leaves the kids stranded on a virtual island and local hooligans steal their food and lose it in the river but they all end up helping each other on a raft they’ve built from barrels and pieces of wood, Blue Peter-style. Smartly written by Jean Scott Rogers, excellently directed by Frederic Goode who seamlessly incorporates news footage and gets brilliant performances from the cast of kids. If only all filmmaking were this efficient. Great shots of the flooded Fens, and of The Cutter Inn in Ely.