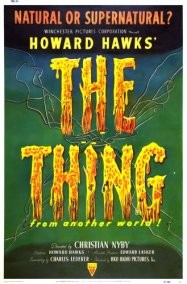 Do you suppose the Pentagon could send us a revolving door?  Scientist Dr. Carrington (Robert Cornthwaite) reports a UFO near his North Pole research base, the US Air Force sends in a team under Capt. Patrick Hendry (Kenneth Tobey) to investigate. They uncover a wrecked spaceship and a humanoid creature (James Arness) frozen in the ice. They bring their discovery back to the base, but Carrington and Hendry disagree over what to do with it. Meanwhile, the creature is accidentally thawed and begins wreaking havoc... That’s what I like about the Army – smart all the way to the top! Produced and closely supervised by Howard Hawks, although this is credited to editor Christian Nyby as director, it is usually categorised as a Hawks film (Tobey said Hawks directed all but one scene) and it has his usual tropes – a community of professional men on a mission, quick wit and a feisty woman (and Margaret Sheridan gets most of the best lines as Tobey’s useful love interest). I’m not your enemy – I’m a scientist! Add to this an alien accidentally defrosted and a journalist desperate to share a scoop, together with a philosophical difference between soldiers and scientists raging as a blizzard whirls outside and you have a thriller perfectly modulated in tense phases culminating in a dynamic fight that emblemises the Cold War (that setting’s no accident). Part of the narrative’s psychology derives from the horrors of Hiroshima and contemporary public scepticism about the supposed advances of science. This is a fun, smart, well-written and staged entertainment – it could only be Hawks, not that it really matters. Adapted from John W. Campbell Jr’s 1938 novella Who Goes There? by Charles Lederer with uncredited work by Ben Hecht and Hawks. Watch the skies!

Too mad to be scared and too sick to be worried about it.  Heartless tycoon Bart Jason (Edward Asner) hires a group of thugs to force the MacDonald family out of El Dorado so he can claim their land. J.P. Harrah (Robert Mitchum) the town’s sheriff, is too deep in the throes of alcoholism to help the family. When Harrah’s friend, noble elder gunfighter Cole Thorton (John Wayne), learns of the predicament, he travels to El Dorado with his upstart friend young gambler Mississippi (James Caan), to help Harrah clean up in time for a shootout against Jason’s men and hole up in the local jail with the assistance of an ageing Indian Bull Harris (Arthur Hunnicutt) and the regular attendance of local medic Miller (Paul Fix)… You made better sense when you were drinking. People forget that part of producer/director Howard Hawks’ uniqueness in the American canon is just that – he was American. So his choice of subjects and his treatment of them is particular to him but also emblematic of the State of the Union itself. His re-union with screenwriter Leigh Brackett (and what a thrill it was to discover this gifted author was a woman!) adapting Harry Brown’s 1960 novel The Stars in Their Courses years after their first collaboration on The Big Sleep (they also did Rio Bravo and Hatari!) sees him at seemingly his most relaxed in a smoothly entertaining meditation on ageing, friendship, loyalty and good old-fashioned decency, detonating notions of heroism with ideas of fellowship and community. With all that, there are two shots worthy of a Hitchcock suspenser; a great showcase for both up and coming Caan and some mighty women (Michele Carey as ‘Joey’ MacDonald, Charlene Holt as the saloon owner Maudie whom both Thornton and Harrah love); and a demonstration that there is nothing like great star performances to make a good screenplay work. Wayne even plays a character named after his favourite Fordian hero and falls in a door during the climactic shootout, done for. Would that we had their like nowadays. Biker movie fans will enjoy seeing Adam Roarke as one of the MacDonald brothers. With a score by Nelson Riddle and wonderful title paintings by Olaf Wieghorst (who appears as Swede Larsen) this is so perfect you’ll believe you’ve downed a fine wine. You’re too good to give a chance to

The language is confusing, the actions are unmistakable.  Absent-minded chemist Dr. Barnaby Fulton (Cary Grant) is developing a pill that will defy the ageing process for the pharmaceutical company run by Oliver Oxley (Charles Coburn). When a loose chimpanzee mixes chemicals together that produce this effect, Fulton tries some on himself. This prompts him to act like a teenager, making passes at Oxley’s beautiful buxom secretary, Lois (Marilyn Monroe). Soon everyone, including Fulton’s wife, Edwina (Ginger Rogers), is feeling the effects of the formula and Edwina doesn’t enjoy the effects of youth when she finds herself reliving their honeymoon in the exact suite they spent their wedding night.  When Barnaby goes AWOL she awakes to find a baby beside her in bed … Harry Segall’s story was adapted by director Howard Hawks, Ben Hecht, Charles Lederer and I.A.L. Diamond and has a lot of bright moments.  It starts in stilted fashion however and the lack of a score (Hawks generally couldn’t abide them) leaves the unpunctuated action wanting. Monroe’s supporting role is underlined by Coburn’s declaration, Anyone can type! when he sends her to find someone to produce a letter; while Grant’s physicality is thrown into relief with a buzzcut. Their day out in his fast-moving roadster as he loses his sight behind his Coke-bottle glasses would be paid homage six years later with Tony Curtis and Monroe in Some Like It Hot.  Never quite reaches the apex of screwball that Hawks himself had pioneered fifteen years earlier but it’s good for filling in a filmography that was at times sheer easygoing genius and there are points here when it recaptures the genre’s extraordinary vitality. Coburn and Monroe would be reunited with Hawks in Gentlemen Prefer Blondes.

Cherry was right. You’re soft, you should have let ’em kill me, ’cause I’m gonna kill you. I’ll catch up with ya. I don’t know when, but I’ll catch up. Every time you turn around, expect to see me, ’cause one time you’ll turn around and I’ll be there. I’m gonna kill ya, Matt.Headstrong Thomas Dunson (John Wayne) starts a thriving Texas cattle ranch with the help of his faithful trail hand, Groot (Walter Brennan), and his protégé, Matt Garth (Montgomery Clift), an orphan Dunson took under his wing when Matt was a boy when he was the only survivor of an Indian attack on a wagon train. In need of money following the Civil War and 14 years after starting the ranch, Dunson and Matt lead a cattle drive to Missouri, where they will get a better price for his 10,000 head than locally, but the crotchety older man and his willful young partner begin to butt heads on the exhausting journey… Famous as a collision of egos and acting styles (Wayne vs. Clift, who was making his first pilgrimage from the New York stage), Paul Fix (who plays Teeler Yacey), Borden Chase and Charles Schnee adapted the screenplay from Chase’s Saturday Evening Post story Blazing Guns on the Chisholm Trail, a fictional account of the first cattle drive west. It was shot in 1946 but director Howard Hawks was unhappy with the edit and handed it to Christian Nyby who spent a year on it. He declared of Wayne, I didn’t know the son of a bitch could act! And it is an extraordinary Freudian story in its contrast portraits of masculinity, a brilliant exposition of father-son conflict and of the kind of family romance most people don’t understand in the mythical context of the conquest of the land of the Americas. Quite profound and a great action movie too. Co-directed by Arthur Rosson. 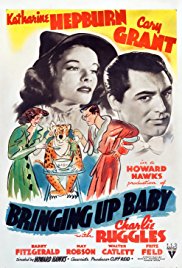 Now it isn’t that I don’t like you, Susan, because, after all, in moments of quiet, I’m strangely drawn toward you, but – well, there haven’t been any quiet moments. Harried paleontologist David Huxley (Cary Grant) has to make a good impression on society matron Mrs. Random (May Robson), who is considering donating one million dollars to his museum. On the day before his wedding to Alice Swallow (Virginia Walker), Huxley meets Mrs. Random’s high-spirited young niece, Susan Vance (Katharine Hepburn), a madcap adventuress who immediately falls for the straitlaced scientist when she steals his car and crashes it on a golf course. The ever-growing chaos – including a missing dinosaur bone and a pet leopard – threatens to swallow him whole… Wildly inventive, hilarious and classic screwball comedy from director Howard Hawks, written by Hagar Wilde and Dudley Nichols and performed by a group of actors indelibly engraved on our collective brains for their roles here.  Hepburn learned from Grant’s uptight persona to play it straight and if it were any slower this would be a film noir because she is one of the fatalest femmes you could ever dread to meet in a text bursting with double entendres. With Charles Ruggles, Barry Fitzgerald and Fritz Feld (as a psychiatrist!) bringing up the rear, Asta the dog from The Thin Man series and The Awful Truth (uncredited! the injustice of it!) and Grant going ‘gay all of a sudden’ what we have here is gaspingly funny cinematic perfection. 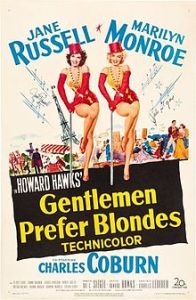 Where to start with this midcentury Marilyn classic? She’s showgirl Lorelei Lee, gold digger supreme, who takes a transatlantic cruise with BFF Dorothy Shaw (Russell) to wed her naive heir of a fiance Gus (Tommy Noonan) in France. His father sends a private eye Ernie (Elliott Reid) to catch her doing anything untoward. But while he falls in love with Dorothy, Lorelei attracts a silly old diamond mine owner ‘Piggy’ (Charles Coburn) who’s travelling with his no-nonsense battleaxe wife, who happens to have a rather eyecatching tiara. There’s the US Olympic men’s athletics team, a very wealthy boy with a very deep voice and some amazing songs – including ‘Diamonds Are a Girls’ Best Friend,’ that iconic Marilyn showstopper the opening notes of which are trilled by Marni Nixon, whose death was announced yesterday. Howard Hawks directed Charles Lederer’s adaptation of the stage show by Anita Loos and Joseph Fields, which had been staged on Broadway with Carol Channing. Loos had of course written the source novel in the 1920s. It’s a brilliant excavation of class through satire and there are amazingly risque lines and gags and despite what everyone says, it’s really the men who are being objectified. The girls are the whole show. Sublime.

Sheerly enjoyable entertainment, as though it were the most relaxed movie ever made and feels like it all just happened by accident. And yet Harry Kurnitz wrote the story, Leigh (The Big Sleep) Brackett wrote the screenplay and Howard Hawks did one of his most famous ‘professional men working in a group’ efforts as the auteurists would have it. As a young child when I first saw it, I just wanted to be in the middle of this mess of beautiful people with the best job in the world (catching, not killing, beautiful animals) in the best place in the world – Africa. Henry Mancini wrote ‘Baby Elephant Walk‘ for the film. And who on earth wouldn’t want to be Elsa Martinelli? The ultimate desert island movie. Gosh this is just wonderful.