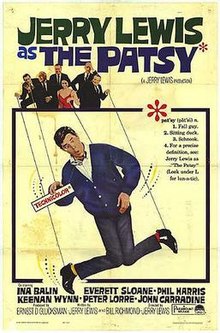 Uh, the people in the theater know I ain’t gonna die. Here, it’s a movie stage.  Eccentric hotel bellhop Stanley Belt (Jerry Lewis) is recruited unexpectedly by the comedy team of a top entertainer who has died in a plane crash and whom they are seeking to replace with a nobody. Stanley struggles to become a song-and-dance man as the team including producer Caryl (Everett Sloane), writer Chic (Phil Harris) and assistant Ellen (Ina Balin) – grooms him to become a star. But as the date of a high-stakes appearance on The Ed Sullivan Show grows near, they begin to fear that the only astonishing thing about Stanley is his utter lack of talent. They drop him but Ellen supports him, he becomes a hit and now they want him back … They simply want to make you a star. An unofficial sequel to The Bellboy, this is one where you either love Lewis’s autistic-modernist shtick, or you plain don’t. However the raft of appearances by celebrities and personalities of the big and small screen is jaw-dropping and Lewis’ voice training scene is priceless. You might find broad similarities to The Girl Can’t Help It, which had starred Jayne Mansfield in a work by Lewis’ mentor Frank Tashlin but this takes the concept of a rock ‘n’ roll death and inscribes the dread fear of the comedian – being rewritten by his own team.  There are clever Chaplinesque situations and witty insights into backstage sycophants and their motivations. At its heart this is a serious film about the pressure to be funny.  Featuring the final screen performances of both Peter Lorre and Everett Sloane as part of his manipulative entourage. Directed by Lewis, who co-wrote with Bill Richmond. This is a movie 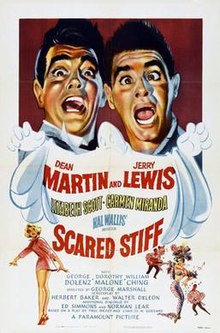 – This thing’s dead. – It’s in the right place. Vaudevillian Larry Todd (Dean Martin) thinks he’s killed a mobster in NYC and wants his sidekick Myron Mertz (Jerry Lewis) to get him out of the country on board a ship. Mary Carroll (Lizabeth Scott) inherits her family’s ancestral home on a small island off Cuba and despite warnings and death threats, decides to sail there and take possession of the supposedly haunted castle. Larry sees in a newspaper that he isn’t the killer after all but it’s too late – the ship has sailed. Once on the island the three enter the eerie castle and after seeing the ghost of one of Mary’s ancestors and fighting off a menacing zombie, find the key to the castle’s treasure… The Lewis-Martin shtick may not be to everyone’s taste and in fact they didn’t even want to remake George Marshall’s 1940 Bob Hope hit comedy The Ghost Breakers – because it was just about perfect. But Paramount had their way and it was turned into this (unfortunately monochrome) musical version of the 1909 play by Paul Dickey and Charles W. Goddard and adapted by Herbert Baker and Walter DeLeon. Norman Lear got his first screenwriting credit here for some rewriting work and Marshall was on directing duties again. Martin and Lewis purvey their spry act and the scene when Myron has to lip sync to Carmen Miranda’s song Mamae Eu Quero as the record sticks on the turntable is a highlight – her own performances aren’t too bad here either! But things really get going in the haunted house. Silly fun with an unexpected cameo (or pair of them.) 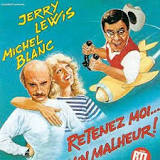 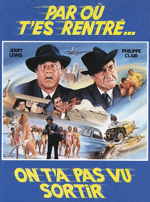 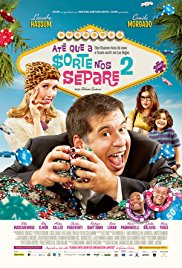 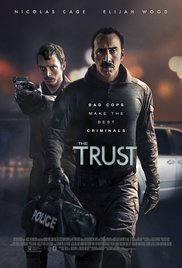 The great American comic Jerry Lewis has died. One half of a famed partnership with crooner Dean Martin, in which he played an idiot to the smarter singer, he was a star of TV and radio before they conquered feature films. After working with Frank Tashlin it seemed Lewis found a desire to make films himself. Janet Leigh speaks about the fun weekends she spent at his home shooting slapstick shorts – he would of course become a famed auteur, making very formally dynamic comedies with himself as the star. The greatest of these is probably The Nutty Professor in which he apparently sends up Dino’s image as cooler-than-thou hep singer Buddy Love. In other works like The Bell Boy he creates astonishing tableaux of the kind beloved of the French director and comic Jacques Tati. He would come a cropper with The Day The Clown Cried, a Holocaust film too far which was buried by the studio (he reputedly owned the sole remaining print) but the French embraced him and he even starred in a couple of films in France in the 80s. That was the period when the American audience embraced him again as he starred for Scorsese in The King of Comedy, where he seemed to channel a part of himself that was not visible in his annual charity telethons. His appearances in supporting roles in films like Funny Bones kept him on the big screen but he more or less retired in 1995 until some very recent roles. His persona is indelibly connected with midcentury cinema but his career as director-star is something special. Rest in peace, Jerry, we shall not see your like again. 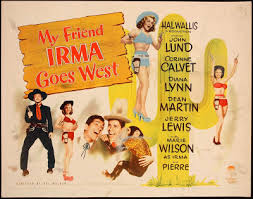 The famous radio sitcom gets another big screen go-round in this diverting entertainment whose principal attraction is the Lewis-Martin team, sidekicks to wannabe card sharp John Lund, Hollywood actress Wilson and singer Lynn. Lewis’ goofy scenes with a chimp are very funny and even the PC crowd will forgive him for redding up as an Indian. (Lewis, that is.) With gangsters, kidnapping, a loony tunes fake producer, TV stardom, and a typically good music track by Leigh Harline. Written by Cy Howard and Parke Levy, directed by Hal Walker. 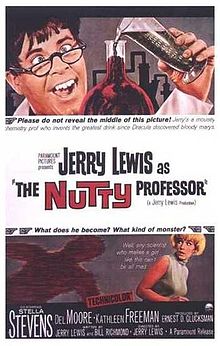 This Jerry Lewis masterpiece is a cult favourite and not just at my house. Or France. Lewis had the genius idea to reinterpret Dr Jekyll and Mr Hyde as a supposed exploration of his own dualistic personality – or maybe he’s just having a dig at his real-life (former) other half, the cooler-than-thou Dean Martin. Julius Kelp (a character that had earlier appeared in Rock-A-Bye-Baby) is the muddle-headed buck-toothed chemistry lecturer who wants to beat the bullies and develops a serum that transforms him into obnoxious hipster Buddy Love, a hit with the glorious student Stella By Starlight, Stella Stevens, who digs him but really prefers the real guy underneath. Great nightclub scenes when Julius’ unfortunate croak breaks through at the most inopportune of moments and there’s that legendary Alaskan Polar Bear Heater routine for the real fans. Wonderful looking, with Lewis really in command of the frame and costumes by the legendary Edith Head, an apt choice for this Paramount tale of transformation. Classic stuff.