We’ve got a world where people have to die because we don’t know how to live. Seven women from different backgrounds meet at an Auxiliary Territorial Service training camp. “Gentle” British girls, including sensible Scot Maggie Fraser (Rosamund John), Anne (Joyce Howard), who is from a service family and the youngest, Betty (Joan Greenwood), they are joined by Czech refugee Erna Debruski (Lilli Palmer) and are now doing their bit to help out in World War 2 from drilling and driving lorries to manning ack-ack batteries … You’ve a great resemblance of a girl I’ve a mind to marry. Writer and co-director Leslie Howard [with an uncredited Maurice Elvey who worked on it following the death of his colleague’s mistress] voices an ‘ironic’ narration (written by Doris Langley Moore) which may have its own ironically patronising overtones but this portrait of female solidarity, hard work and loss while those brave menfolk are overseas is not just fine propaganda but a bewitching home front experience. Six characters in search of … what? Howard deadpans. With additional dialogue by Aimee Stuart and uncredited rewrites by Roland Pertwee and Elizabeth Baron from an original story and screenplay by Moie Charles, it gifts John with one of her best roles and she excels, especially in the comedic relationship with John Laurie. This is a woman’s war. The structure provides the anticipated social overview but interestingly these are women who do not require men’s approval (unlike the similarly themed Millions Like Us). Good on detail, relationships and loyalty, it’s a fount of social history, utilising a documentary style and emphasis on the collective to achieve the affect of togetherness:  it works. Now we have hatred to fill the empty spaces in our hearts

Why don’t we turn this island into a democracy and elect a leader? During the Civil War, a group of soldiers led by Captain Cyrus Harding (Michael Craig) escape a Confederate prison siege using an observation balloon, and due to a storm that lasts four days and pitches them off course, are forced to land on a strange island that is full of tropical jungles and volcanoes. They are confronted by giant mutated animals, find two Englishwomen, Lady Mary Fairchild (Joan Greenwood) and her niece Elena (Beth Rogan) washed up from a shipwreck, fight marauding pirates and are then confronted by the infamous Captain Nemo (Herbert Lom) whose submarine the Nautilus was feared lost off Mexico eight years previously. They need to escape and that volcano is rumbling but will Nemo assist them using his engineering genius? … We lived like primitive men using primitive implements. The followup to 20,000 Leagues Under the Sea doesn’t start particularly promisingly – the escape from the Confederate prison isn’t very well handled by director Cy Endfield, not the first name you’d come up with for an effects-laden juvenile fantasy flick taken from Jules Verne’s two-part novel. However when the action kicks in on the island and the Ray Harryhausen effects interplay with the threat of a volcano about to blow and those sheer painted backdrops hint at disaster, well, it finally gets interesting. Everything is punctuated by regular run-ins with those giant creatures who are the result of Nemo’s horticultural physics experiments. The laughs come courtesy of war journo Gideon Spilitt (Gary Merrill) who has an ongoing run of food jokes: I wonder how long this will take to cook in a slow oven, he deadpans about the giant chicken they believe they’ve killed; turns out Nemo shot it. The cast is excellent although Craig doesn’t set the screen alight and it’s great to see Lom doing his Nemo:  he’s a misunderstood guy who just wants to stop the causes of war. Rogan and Michael Callan get to do a bit of romancing before being sealed into a giant honeycomb; while Percy Herbert and Dan Jackson bring up the rear. The whole shebang is carried by Bernard Herrmann’s sonorous score, booming from the screen as surely as those explosives. From a screenplay by Crane Wilbur, Daniel B. Ullman and John Prebble. Shot at Shepperton Studios and on location in Catalonia. A man could write an inspired novel in a place like this

You would never know that this was an Ealing comedy – it is totally unsentimental. Louis D’Ascoyne Mazzini (Dennis Price) is in prison awaiting his execution when he puts pen to paper and recounts the reason for this turn of events. Born to a beautiful if rash aristocratic mother who ran off with an Italian opera singer, this orphaned young man is now working in a draper’s when his lady love Sibella (Joan Greenwood) marries a love rival. He sets out to dispatch the eight remaining members of the D’Ascoyne line to recuperate the title he feels is rightfully his. All of them – including the venerable Lady Agatha – are played by Alec Guinness. (He also played a ninth!). Louis marries the virtuous wife Edith (Valerie Hobson) of one of them. The range of their respective deaths is stunning. A sublime work of British cinema, adapted from Roy Horniman’s 1907 novel Israel Rank:  The Autobiography of a Criminal by John Dighton and the woefully underrated director Robert Hamer, whose masterpiece this is. Transgressive, ironic and subversive, and the ending is simply genius. Breathtaking black comedy for the ages. Perfection. 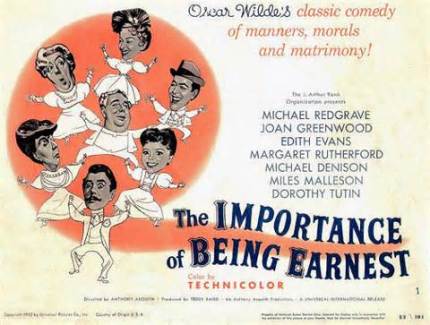 To speak frankly, I am not in favour of long engagements. They give people an opportunity of finding out each other’s characters before marriage. Which I think is never advisable. Valentine’s Day 1895, England. Circumstances compel Ernest (Michael Redgrave), whose real name is Jack Worthing, and Algernon Moncrieff (Michael Denison) to pretend to be someone that they are not.  My name is Ernest in town and Jack in the country. Jack has created a fictional brother to cope with life in the country while Algernon poses as Jack’s brother and uses the name Ernest to woo Jack’s pretty young ward, his adoptive cousin Cecily Cardew (Dorothy Tutin). Jack is in love with Algernon’s cousin Gwendolen Fairfax (Joan Greenwood) whose formidable mother Lady Bracknell (Edith Evans) is not amused. And before he can propose he has to sort out the matter of Cecily who shares with Gwendolen a devotion to the manly name of Ernest and they are both engaged to him … To lose one parent, Mr. Worthing, may be regarded as a misfortune; to lose both looks like carelessness… Straightforward presentation of Oscar Wilde’s classic parlour comedy of manners and mistaken identity, with the immortal Edith Evans giving a peerless rendition of Lady Bracknell. A handbag?! That line can never be delivered by anyone without reference to this performance. The penultimate scene, a face-off between Bracknell and the tutor Miss Prism (Margaret Rutherford) that yields the mystery of identity at the story’s heart, is utterly delectable.  I never travel without my diary. One should always have something sensational to read on a train. Joan Greenwood was likewise born to play Gwendolen. This can’t be beaten for fidelity to the text, an extraordinary cast and exquisite timing. Virtually every elegant, hilarious line – an aphorism, a truism, a witticism – belongs in a book of quotations. The very essence of romance is uncertainty. Beautifully plush Victoriana adapted and directed by Anthony Asquith. All women become like their mothers. That is their tragedy. No man does. That’s his