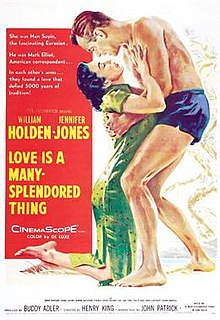 Our gorgeous lie did not even last the night. Hong Kong 1949. American journalist Mark Elliott (William Holden) is covering the Chinese civil war. Undergoing a trial separation from his wife, he meets beautiful Dr. Han Suyin (Jennifer Jones), a widowed Eurasian physician originally from mainland China. As the pair fall in love, they encounter disapproval from both her family, his friends and Hong Kong society about their interracial romance … I have my work and an uncomplicated life. I don’t want to feel anything again… ever. This outrageously beautiful melodrama lingers long in the memory for its Widescreen Deluxe images, shot by the great Leon Shamroy, including two weeks on location in its Hong Kong setting; and its cast. Adapted by John Patrick from Suyin’s 1952 autobiographical novel it’s a pulsatingly lush romance, played to the hilt and given gravitas with its issues of race against a background of the war in China leading to a takeover by the Communist Party. The subject matter meant there was trouble getting it off the ground in those censorious days. The production was no less troubled, with the stars eventually coming to loathe each other. None of that matters because the performances sing in a carefully dramatised story that boasts some of the most romantic scenes in either of their careers. All those love letters, kissing on hilltops, swimming … it’s a spectacular and vivid epic, sad and tender. And was there ever a more impressive hunk of sexy mid-century masculinity than Holden?! There is a strong supporting cast including Torin Thatcher, Murray Matheson and Isobel Elsom, rounding out a snapshot of colonial life in those post-WW2 days. Ornamenting the gorgeous score by Alfred Newman is the title song by Sammy Fain and Paul Francis Webster, one of the great movie themes, and it’s sung by The Four Aces. It was an enormous hit, just like the film.  Patrick would write another Hong Kong-set romance starring Holden, The World of Suzie Wong. Directed by Henry King, who had a knack for making beautiful films, with second unit location work by Otto Lang, who is uncredited. Love is nature’s way of giving a reason to be living, The golden crown that makes a man a king

James Michener’s Korean War novel gets a vivid interpretation by screenwriter Valentine Davies and director Mark Robson, with some impressive aerial photography and effects.  William Holden is the lawyer recalled to the Navy to fly bombs to support ground troops and his fear-filled ambivalence reminds commander Frederic March of one of his own sons killed in World War 2. Grace Kelly is only in the second quarter of the film, to see her husband on leave in Japan and there are nice scenes with their kids and her own scene with March who explains the dangers her husband faces to prepare her for potentially tough times ahead.  Mickey Rooney is the chopper pilot who’s pulled Holden from the sea so Holden returns the favour on shore leave when Rooney brawls with a love rival. He and Earl Holliman are a tight partnership who dig the pilots out of holes. But over it all hangs the mission:  a dangerous attack on strategic bridges and, well, it’s war. That never ends well. 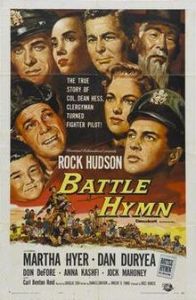 I love the films of Douglas Sirk because despite their largely being remakes of weepies he cuts through the sentiment with astringency and formal style. Usually. Not so here in an adaptation of a memoir by preacher Dean Hess. Hudson is full of remorse for having accidentally killed 37 children in a German orphanage in WW2 and signs up to train fighter pilots in Korea leaving wife Martha Hyer at home to brood (literally – she’s pregnant). He conceals his religiosity and newfound ministry from old buddy Don DeFore and his colleagues until he’s found out and they feel deceived. He puts his beliefs to good use in acts of atonement for local orphans who are being cared for by Anna Kashfi (the London Irish model who pretended to be Indian, even fooling husband Marlon Brando). She falls for him, unaware he is married and he participates in bombing missions and then tries to save DeFore after a disastrous outing and the orphans need to be saved from repeat attacks. This is in many ways a typical service movie but with added mawkishness rendering it close to intolerable even with Hudson acting his socks off and some more than decent aerial photography.