Tap it gently. We’re not here to announce a film. In September 1939, confusion reigns when St Swithin’s Girls’ School is relocated to the countryside and accidentally billeted at Nutbourne College, a long-established boarding school for boys. The two heads, Wetherby Pond (Alastair Sim) and Muriel Whitchurch (Margaret Rutherford), try to cope with the ensuing chaos, as the children and staff attempt to live in the newly cramped conditions (it being impossible to share dormitories or other facilities), and seek to prevent the children taking advantage of their new opportunities. But with the domestic staff up in arms and departing, St Swithins’ home economics students are not really cutting the mustard and their parents are visiting… My mind is made up on one thing Miss Whitchurch: if I sink, you sink with me!  With titles by Ronald Searle and a cast that includes Joyce Grenfell, Guy Middleton and Richard Wattis (and an uncredited George Cole) you’d be forgiven for thinking you’d wandered into a St Trinian’s film by mistake. In fact that series’ authors, Frank Launder and Sidney Gilliat, are responsible for this outing, which takes a superb cast and a tilt at bureaucracy, a dig at the post-war problems besetting 1950s Britain.  Some terrific setpieces include literally moving the goalposts when the parents’ tour coincides with the governors’ of the prestigious school where Pond is hoping to get his next appointment. We’re waiting for an explanation Mr Pond!/Can’t you see I’m trying to think of one? Adapted by John Dighton from his own play with Frank Launder. A lot of droll fun with Sim and Rutherford in their element. Call me Sausage!

One should never do a play written by a woman, they always hold you up. In an English provincial town a second-rate repertory company assembles at the Theatre Royal  to rehearse the following week’s play, a melodrama titled Tarnished Gold. Harry (Robert Morley) the hot-tempered Producer, is highly critical of the play, which has been foisted on him and is unenthusiastic about its prospects. The cast includes Jerry (Michael Medwin) a young and sometimes keen actor, Maud (Olive Sloan) a widowed actress who was once famous on the West End stage, Sandra (Kay Kendall) who is waiting for (and receives) a call from a London producer who calls her instead of her philandering and semi-alcoholic husband (Liam Gaffney), and Avis (Joan Rice) a timid young girl who is quickly realising that acting is not for her. The cast is equally unenthusiastic about the play. Little progress is made. ‘Jacko’ (Lloyd Lamble) the director, is at his wits end and threatens to resign, his regular habit when things go wrong. Things can’t get any worse but then the author of the play, Jeremy St Claire turns up and she turns out to be  a woman – Catherine Beckwith (Margaret Rutherford).  She insists on ‘sitting at the feet’ of the Director. She and Harry are quickly at each other’s throats. Harry tears up most of Act 1 and tells her to do what Edgar Wallace did – disappear into a phone kiosk for a couple of hours and come back with forty new pages. He storms angrily off stage, falling into the pit and injuring himself, literally losing the run of things as his fantastical ramblings take hold. Despite the forebodings of the cast, Miss Beckwith insists on taking over the rehearsal according to her own ideas. She recasts the play as a period piece and introduces new stage techniques. How will it work out? … I think I see the beginning of a plot on page twenty-seven. And we are on page one. Oh joy! Three of my favourite British actors in one film! Morley, Rutherford and Kendall, who don’t have a huge amount to work with in this adaptation of Philip King’s play On Monday Next by Jack Davies and Michael Pertwee (brother of the greatest Doctor Who!) but who do have some sly repartee and physical comedy to play.  Morley/Harry refers to a production of Rebecca – in reality he and Rutherford were in the original London stage production, with Rutherford playing Mrs Danvers. Imagine that! Their clash here is very amusing. Stringer Davis, Rutherford’s offscreen husband, turns up as Avis’ dad just in time to see Jerry kiss his daughter. Kendall has some mini-drama over her husband’s infidelity but it’s her career that’s in the ascendant while he thinks real acting is for cinema – which makes this even more of a mockery of popular theatre. It’s pretty thin stuff, only of interest for the sparky players. The impact is elevated with a Malcolm Arnold score and it’s directed by Ralph Smart.

Aka Big Time Operators. Virginia McKenna and Bill Travers are shocked to find that his great-uncle’s bequest is the Bijou Kinema aka The Fleapit and the neighbouring Grand has a grasping owner who makes them an offer they refuse – they bluff that they’re going to reopen. Unfortunately commissionaire Old Tom (Bernard Miles) – one of three old-timers in the Bijou’s inherited staff including bookkeeper Mrs Fazackalee (Margaret Rutherford) and drunken projectionist Mr Quill (Peter Sellers) – lets slip to a Grand employee that it’s all a show:  so then they have to go through with it. Dodgy equipment, low crowds and a constant supply of American B-westerns don’t help. But a sexy ice cream salesgirl (June Cunningham) brings an audience and Old Tom makes up for his mistake and the Grand is burned to the ground … A fun story of English eccentricity but coming from the pen of William Rose (and John Eldridge) we might presume it’s actually an allegory for Keeping Calm and Carrying On. Produced by Launder and Gilliat and Michael Relph, directed by Basil Dearden, in a kind of Ealing Comedy shot by Douglas Slocombe with added Leslie Phillips and Sid James plus a score from William Alwyn. Charming! 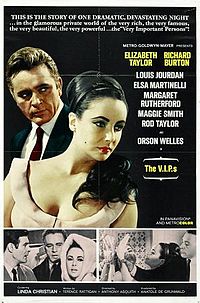 As summer’s lease expires,why not holiday in grand style and spend your fogbound autumnal hours in the company of people who dress up to take a flight? Those must have been the days – when turning right did not mean encountering the tracksuited hoi polloi and getting a DVT from squeezing your long legs into Economy. Director Anthony Asquith had been quite the radical filmmaker but settled into prestigious well-made dramas so a Terence Rattigan screenplay about the jet set and their crises in the departure lounge at Terminal 3 when their NYC flight is delayed at Heathrow proved just the ticket:  Grand Hotel in the airport (disasters could come along a decade later). Taylor and Burton were at the height of their affair and they play out a romantic drama – she’s leaving him for smooth Louis Jourdan, he’s going to pieces. The glorious actress Gloria Gritti (Elsa Martinelli) is with her producer Svengali Max Buda (Orson Welles) as he tries to persuade her to play Mary Stuart while waiting for the flight to save him from a tax bill. Businessman Les Mangrum (Rod Taylor) is desperate to save his company and his secretary Miss Mead (Maggie Smith) comes to the rescue. That’s Linda Christian as his beautiful wife. Oh, the female pulchritude! Margaret Rutherford is faking wealth as a Duchess and she has some great scenes, especially with real-life husband Stringer Davis. She got an Academy Award for her trouble. I want to be her when I grow up!  Fetch me my flight bag and my fake fur, I have a BOAC to catch.