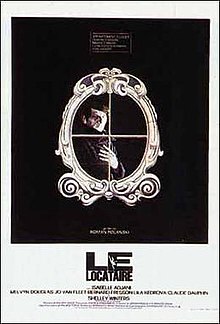 Aka Le locataire. If you cut off my head, what would I say… Me and my head, or me and my body? What right has my head to call itself me? Shy bureaucrat Trelkovsky (Roman Polanski) is a Polish-born French citizen who moves into an apartment whose previous female tenant an Egyptologist called Simone Choule threw herself out a window and is dying in hospital, never to return. As his neighbours view him suspiciously, he becomes obsessed with the idea of the beautiful young woman and believes that her friend Stella (Isabelle Adjani) is planning to kill him … These days, relationships with neighbors can be… quite complicated. You know, little things that get blown up out of all proportion? You know what I mean? We know how claustrophobic apartments can be from Repulsion and Rosemary’s Baby. This apartment is in Paris and it is the centre of the neighbours’ gossip and pass-remarkery, those objects of fear for someone who doesn’t wish to be found out, Gérard Brach and Polanski’s adaptation of Roland Topor’s novel Le Locataire Chimérique, turning a suggestive thriller into a paranoid fantasy with a sort of macabre chalky undertaste. Trelkovsky’s introduction to the apartment and view of the lavatory opposite is brilliant and the meet-cute with Stella over the gaping Munchian maw of a moaning mummified Simone is unforgettable. It may not be as beautiful as his other apartment movies but Polanski’s intent is quite clear with the regular reminders of toilet functions and the running gag about cigarettes.The casting is superb: Melvyn Douglas is great as Monsieur Zy, Lila Kedrova as Madame Gaderian with her crippled daughter are spooky while Shelley Winters excels as the concierge. On the one hand, it’s a dance of death bristling with atmosphere and Polanski is its fulcrum, revealing Trevolsky’s gender slippage as surely as he sheds his masculine outerwear while simultaneously descending into the brutal, funny depths of psychological disintegration.  On the other, it’s a perfect film about how lonely it can be a foreigner in the big city and how easy it is to lose oneself while others are watching you. For total trivia fans, the continuity here is done by Sylvette Baudrot who did that job for that other master of apartment movies Alfred Hitchcock on To Catch a Thief.  It’s a wonderful, scary funny Kafkaesque nightmare portrait of Paris and the ending is awesome:  talk about an identity crisis. I am not Simone Choule!

The meek shall NOT inherit the earth. They can’t be trusted with it.  British archaeologist Professor Julian Fuchs (Andrew Keir) and his team bring the preserved mummy of Egyptian royal Queen Tera (with a severed hand) back from their latest expedition. Fuchs’ rival Corbeck (James Villiers) persuades the archaeologist’s daughter Margaret (Valerie Leon) to get the expedition members to hand over missing relics but each time one is handed over the person holding it dies because Margaret is possessed by Tera’s evil spirit since her father gave her a bejewelled ring from the tomb.  Her nightmares about the expedition seem have now come to life … The late great Chris Wicking adapted (more, or less) Bram Stoker’s The Jewel of the Seven Stars but was banned from the set by producer Howard Brandy and continued working with director Seth Holt in the evenings. Peter Cushing was supposed to play Fuchs but dropped out when his wife became seriously ill. Five weeks into shooting Holt died in the arms of a cast member. He was replaced by Hammer boss Michael Carreras who found that Holt’s work didn’t cut together. This extraordinary backstory (the mummy’s real revenge?!) to one of the best of that studio’s late films is incidental to what is a canny interpretation of Stoker, making this modern story seem entirely plausible because of the realistic and sometimes ironic approach. Bond girl Leon is fantastic in the dual role of Margaret and the tragic Queen who turned to evil – both are sexy, of course and Keir does very well as her father. The atmosphere of dread is well sustained while there is some genuinely gruesome action. More than a curio and if not quite the mother of all mummy movies it’s pretty close.