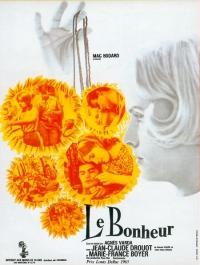 Aka Happiness. Happiness is perhaps submission to the natural order. In suburban Paris, young joiner François (Jean-Claude Drouot) lives a very contented life with his dressmaker wife Thérèse (Claire Drouot) and their two small children. Despite his apparent satisfaction, François takes a mistress named Emilie (Marie-France Boyer) who works at the post office and he doesn’t feel the least bit of remorse for his philandering. He tells his wife and is astonished that she’s upset. While he is able to justify loving both women, the infidelity results in tragic real-life consequences … I have enough joy for both of you. There is so much joy in this film with the flowers and food and babies and general air of happiness, intimate displays of sex (the central couple were married in real life) and sensuality abounding in this working class family. The juxtaposition of the romantic with the daily grind amid the bucolic – even idyllic – setting (ravishingly shot by Jean Rabier and Claude Beausoleil) and the crummy reality of a marriage betrayed, the ease with which one wife can be replaced with another, these are the stuff of life, the nasty realities with which Agnès Varda engaged and discoursed upon so supply and clearly. A cunning exploration of the callousness of men, designed to appear observational and non-judgmental in a blaze of beautiful colours and Mozart. A wolf in sheep’s clothing with an ending that made me gasp the first time I saw it. I am happy and free and you’re not my first man