Freddie Arthur Tom Harry Oscar Milton.  While touring in Europe, beautiful American skydiver Fathom Harvill (Raquel Welch) gets wrapped up in international intrigue when Scottish spy and HADES chief Douglas Campbell (Ronald Fraser) recruits her to help him on a secret mission to retrieve a failsafe nuclear device. Before long, Fathom realises that no one around her, including the mysterious Korean War deserter Peter Merriweather (Tony Franciosa), can be trusted and that’s before she encounters the dastardly Col. Serapkin (Clive Revill) and finds that perhaps the device is not what she’s looking for at all … I’m a hundred years older than the day I met you. Trains and boats and planes and… skydiving. With tongue planted firmly in cheek this slick Bond parody is great fun, loaded with spectacular beauty, not just the spirited Welch but the lovely location work shot by Douglas Slocombe and some nice one-liners which you’d expect from Batman scribe Lorenzo Semple Jr., adapting an unpublished novel (Fathom Heavensent) by Larry Forrester.  Revill makes a great baddie, Franciosa an agreeable hero/villain and Fraser and Richard Briers as Timothy a surprising double act. There’s a great aeroplane chase to conclude everything and a very funky Sixties score by Johnny Dankworth. Welch is really impressive in the light-hearted Mata Hari role. Directed by Leslie H. Martinson who did probably every American TV series in the era as well as the disappointing feature Mrs Pollifax – Spy. My temperature is ten degrees lower than normal. In the presence of great beauty it drops even further 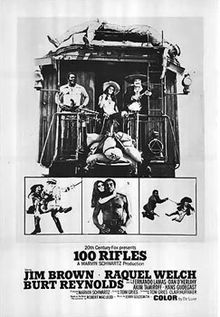 Every time four Mexicans get together one of them makes himself a General.  In 1912 Sonora Mexico, Arizona lawman Lyedecker (Jim Brown) chases Yaqui Joe (Burt Reynolds), a half-Yaqui, half-white bank robber who has stolen $6,000. Both men are captured by the Mexican general Verdugo (Fernando Lamas). Lyedecker learns that Joe used the loot to buy 100 rifles for the Yaqui people, who are being repressed by the government and he regards them as his people. Lyedecker is not interested in Joe’s motive, and intends to recover the money and apprehend Joe to further his career. The two men escape a Mexican firing squad and flee to the hills, where they are joined by the bandito’s sidekick Sarita (Raquel Welch) a beautiful Indian revolutionary. Sarita has a vendetta against the soldiers, who murdered her father. The fugitives become allies. Leading the Yaqui against Verdugo’s forces, they ambush and derail the General’s train and overcome his soldiers in an extended firefight… My daddy was a Yaqui Indian and my mamma was from Alabama. Adapted from Robert MacLeod’s 1966 novel The Californio first by Clair Huffaker and then by director Tom (Will Penny) Gries, this spaghetti western occasioned a great meeting of male and female puchritude recently recalled by Welch:  “The first time I laid eyes on him, he came strolling across the tarmac towards the plane and, well, he had a walk that was unlike anything I’d ever seen before. He was somewhere between a jock and a cowboy, which was just about perfect. I was thinking he’s just the hottest thing. And I haven’t even seen his face!” She was of course referring to Reynolds, who walks away with the picture, macho, moustachioed, sardonically amused when he isn’t fighting, he just oozes charisma and carries the acting and physical duties with ease. Half of it I spent on whisky and women, the other half I wasted! Welch wasn’t happy on set as Brown stated: “[Burt Reynolds] was usually a stabilising influence [between the stars]… He’s a heck of a cat. He had various talks with Raquel and tried to assure her that nothing was going on, that we weren’t trying to steal anything.” I admire a man who dies well  Reynolds himself wrote of the experience:  “I was playing Yaqui Joe, supposedly an Indian with a moustache. Raquel had a Spanish accent that sounded like a cross between Carmen Miranda and Zasu Pitts. Jimmy Brown was afraid of only two things in the entire world: one was heights, the other was horses. And he was on a horse fighting me on a cliff. It just didn’t work… I play a half breed but… I send it up, I make it seem like the other ‘half’ of the guy is from Alabama. I play it nasty, dirty, funky. I look like a Christmas tree — wrist bands, arm bands. At the beginning I even wore these funky spurs. But every time I walked I couldn’t hear dialogue.” He said of the problems with Welch and Brown:  “I spent the entire time refereeing fights between Jim Brown and Raquel Welch…  It started because they were kind of attracted to each other. After a while they both displayed a little temperament, but don’t forget we were out in the middle of the bloody desert with the temperature at 110. Of course, I don’t think they’ll ever work together again. The critics have really been knocking those two — murdering them — but as far as I know no one ever said they were Lunt and Fontanne. Jim is the most honest man I know… And Raquel — one of the gutsiest broads I know, physically. She did all her own stunts. There’s also a performance in there somewhere.”  He and Brown make a great, funny double act. Weirdly, they were born just 6 days apart and of course Brown had the football career Reynolds had dreamed of having. Welch said later: “Jim was very forceful and I am feisty. I was a little uncomfortable with too much male aggression. But — it turned out to be great exploitation for the film, now as you look back. It broke new ground.” She told Variety Reynolds was  “one of my favorites. Nobody did — or does — quite what Burt does. And he has a darker edge, which made the scenes sexy.” It’s beautifully shot by Cecilio Paniagua and Jerry Goldsmith’s score is rousing, compensating for some deficiencies in the action choreography. Lamas is fun as Verdugo and Dan O’Herlihy offers typically good support as villain Grimes with Hans Gudegast (aka Eric Braeden) as the German advisor to Verdugo. Some might see elements of The Wild Bunch and even Blazing Saddles;  one way or another it’s underrated. Cult value lies in the presence of Soledad Miranda as the prostitute with Joe in the opening scenes at the hotel. She is best known for her collaborations with Jess Franco, particularly Vampyros Lesbos. She died aged 27 a year after this was released. I think with a little bit of luck we might be able to get out of this