We’re not dealing in real estate. We’re trying to farm.  Jewell (Jessica Lange) and Gil Ivy (Sam Shepard) run a farm in Iowa that has been in her family for generations. They make enough to just about get by until two devastating events threaten to take their land away. First, a tornado tears through the farming community and devastates the area, then the Farmers Home Administration calls in loans owed by most of the area’s farmers, which most are in no position to repay. The stress buckles Gil and he resorts to getting loaded every night leaving Jewell to do the math and figure out a way to save their way of life… William Wittliff’s screenplay is a properly political piece of work, focussing on the specifics of a family’s response to economic disaster in the era of Reaganomics – to the point that the President decried it which means it hit home.  Gil isn’t exactly a wastrel but his father in law (Wilford Brimley) leaves us in no doubt that he believes he has thrown away an opportunity to make a financial surplus on the best land in the county. Was his drinking to blame for the threatened foreclosure? Terrific performances in this detailed portrait of family life with a standout lowkey characterisation by Levi Knebel as teenaged son Carlisle. There’s an opportunity to see famed drama coach Sandra Seacat play neighbour Louise Brewer whose husband hides sheep from the banks on the Ivy land. The auction scene makes you weep. Heartfelt, powerful stuff. Produced by Wittliff and Lange and directed by Richard Peerce. 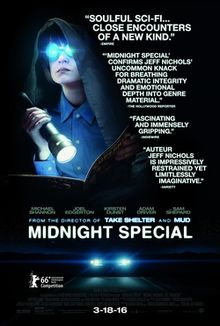 A little boy wearing goggles in a car being moved around by Michael Shannon and Joel Edgerton. An end of days cult in the desert led by Sam Shepard. The FBI chasing the men with the boy. How to describe this masterful exercise in sci-fi and supernature by writer/director Jeff Nichols? A cast in which Adam Driver, the biggest baddie ever in my cinematic universe, is the nicest person? Kirsten Dunst is a mom? A mystery which hangs on an article of faith in which we have no known investment? This is simply great: an intelligent foray into genre that waits to give us information, drip, drip, drip and we have to work out what to believe. And why. Big wow.