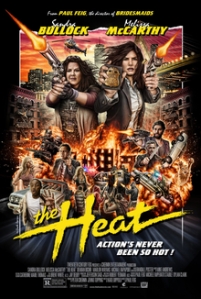 If you’re not in trouble you’re not doing your job.  Ambitious NYC-based FBI Special Agent Sarah Ashburn (Sandra Bullock) is a methodical investigator with a long-standing reputation for excellence and arrogance. She’s better at finding drugs than sniffer dogs and is far superior to her male colleagues so they don’t like her, putting her desired promotion in jeopardy. She can’t even keep a relationship going with a cat so she borrows her neighbour’s.  In contrast, foul-mouthed, hot-tempered Boston Irish detective Shannon Mullins (Melissa McCarthy) goes with her gut instincts and street smarts to remove criminals from the locale, including her brother Jason (Michael Rapaport) which has alienated her family. Her own mother (Jane Curtin) gives her the finger in a drive by.  Sparks fly when these mismatched polar opposites are forced to work together to capture a drug lord, the unseen Larkin, but in the process, they become the last thing anyone expected – buddies. When they discover there’s a mole in the investigation everything is put into jeopardy … My fear is that I’m gonna put you in a bikini and you’ll still look like a fucking bank teller. Screenwriter Katie Dippold has put so many zingers into this you’ll have to watch it twice because you’re laughing so much you miss half of them. This subversion of the odd couple cop/buddy actioner is screamingly funny as it works through the genre’s tropes with zest and two fingers. Bullock’s buttoned-up uptight PC perfectionist priss Ashburn is wonderfully set off against McCarthy’s unkempt foul-mouthed vicious bully Mullins. Ashburn can’t get a date, Mullins has a mystifying physical allure. Thrown together, they are mutually united in their disgust for the albino inflicted on them from the Drug Enforcement Agency – a wonderfully offensive running joke in homage to the film with a film, Goldie Hawn’s brilliant Foul Play (a regular spin here at Mondo Towers). The anticipated painful seam of piss-taking at Boston accents is disposed of in one neat exchange over the Mullins family dinner when Ashburn tells them they’ve dropped the ‘r’ in Narc. Mullins’ realisation her brother is in a coma because of her actions leads to the only transient episode of sentiment as Ashburn’s attitude is transformed hearing the sexist comments made by their male colleagues – she turns into a gibbering expletive-laden mini-Mullins – and triggers the final act when the women’s solidarity becomes ninja-strong. God, you guys are just – what is the matter with you? You’re such… you’re just such jerks! You’re just such… shit jerk! You’re just a shit jerk dick… fucker! You’re a shit jerk dick fucker assholer. And you can all just go fuck yourselves!  With Marlon Wayans as a thick drug dealer and Demian Bechir as the boss who can’t help laughing,  this is lightning fast, hilarious, rude and brilliantly directed by Paul Feig. Truly funny. The cat got one look at your shitty life and said “no fucking thanks, man. I am outta here.”