Aka Blue Night. I’m not done yet. Jazz singer/songwriter Vivienne (Sarah Jessica Parker) has just received a cancer diagnosis. She spends the day walking around New York City, meeting up with her manager Ben (Common) to discuss her upcoming tour, rehearsing with her backing band, telling her ex-husband Nick (Simon Baker) who has custody of their daughter Lucie (Gus Birney), dealing with her overbearing French-speaking mother Jeanne (Jacqueline Bisset), arguing with a taxi driver (Waleed Zuaiter), having an assignation with her drummer and romantic interest Jordan (Taylor Kinney) and reflecting on her life as she comes to terms with her mortality … First a tragedy, then a miracle. An homage to (if not a direct remake of) the late Agnès Varda’s 1962 nouvelle vague classic Cléo from  5 to 7, this is written by Laura Eason and capitalises on Parker’s association with NYC, that city which became so important televisually with Sex and the City in the same way that it has always been for cinema. Reconciling this star’s iconicity with latterday roles is proving problematic. Essentially this is about a woman in a state of perpetual avoidance (even in the course of just one day) and for a character and public persona notable for costume it will be a vast disappointment that until the very last scene she wears the same outfit throughout – save for a session in a boutique in a metaphorical attempt to alter her situation then she presents the dress as a gift to her truculent teenage daughter. This is an indication of a script that’s not altogether in tune with its somewhat dithering protagonist: Parker is not given enough to do and that is quite literally fatal considering this is a film concerning something going on in her head but despite the internalising of the dramatic performance at its centre there are some pithy lines. Vivienne (the irony extends to her name) is about to perform an anniversary gig at Birdland where 25 years earlier great things were forecast but a broken engagement last year somehow triggered a retreat. All of my albums have been triggered by all of my broken engagements, she deadpans to a noxious journalist who has never heard of Donald O’Connor. Renée Zellwegger as her friend Tessa brings a sharpness to a character which makes it more interesting than the scene that perhaps was written, while the scenes between Parker and Bisset are horribly convincing. The feature debut of commercials director Fabien Constant, this is notable for Parker’s quite odd performance of Rufus Wainwright’s marvellous song Unfollow the Rules, indicating that she’s not a jazz singer at all but a different animal entirely, a thread the narrative might have pursued (she still loves Belgian pop singer Lio), just like she should have kicked off her heels and got real, delving deeper into that fascinating hinterland where several interesting signposts are left dangling. I’d like to change the destination 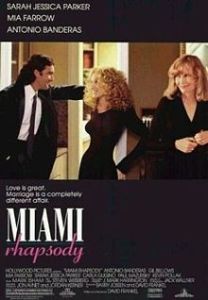 When this was released theatrically I dragged my best male friend along – a psychiatrist who had to concede it was indeed possible to make a female Woody Allen movie even if he really didn’t buy into Sarah Jessica Parker. (And also claimed that Mia Farrow was the spawn of the devil because of what she said about the Woodster – we agreed to disagree!.  I, on the other hand, had been a fan of SJP since Square Pegs and was also incredibly impressed that she had been the long-term galpal of Robert Downey Jr. This was in fact a kind of rehearsal for Sex and the City – writer/director David Frankel worked on the show and costumier Patricia Field first worked with SJP right here. There’s a real lesson in screenplay construction here – since it’s all about marriage. SJP is ad writer Gwyn, who is engaged to zoologist Matt (Gil Bellows) and wants a marriage just like her parents (Mia Farrow and Paul Mazursky). Except her mother confesses her adultery to her with Antonio Banderas, her invalided mother’s nurse, and her father is in a longterm romance with his travel agent. Her newly married sister (Carla Gugino) cheats on her cheapskate footballer husband with her high school ex (Jeremy Piven) and her horndog brother Jordan (Kevin Pollak) hates being deprived of sex by his pregnant wife (Barbara Garrick) so he also confesses his adulterous liaisons to his little sister. Gwyn comes to her difficult decision as everyone around her tells her how disastrous their marriage is … and tries to escape her own commitment by agreeing to try writing a screenplay for a dreadful comedy pilot, dragging Antonio along for support. Needless to say, there is somewhat of an unexpected ending. A great ensemble works very well with a witty script, a guest spot by supermodel Naomi Campbell and superb Florida locations. Great fun – made in those halcyon days when intelligent movies didn’t have to be made on crazy budgets and people could make insightful statements about how to get on with the mundane issue of living with a soupçon of wit.

The perfect Christmas movie with the best actors around – how hard can it be? Well this is a lesson to all those who say it can’t be done – ghastly new release Christmas With the Coopers being an object lesson in everything to be avoided. Here we have an uptight girlfriend (Sarah Jessica Parker) expecting to be the wife of an indecisive businessman (Dermot Mulroney) dragged to his family home for the holidays. Mom Diane Keaton is a smiling bully, Dad (Craig T. Nelson) is an aggressive hippy, sister (Rachel McAdams) is a horrible mix of the two while a gay brother has a black boyfriend and another sister is pregnant and already has a klepto daughter. Bullying PC hippies, in other words. A recipe made in hell.  How SJP finally comes undone when the weed-smoking film editor brother arrives late to the mix is quite something. Superb acting, especially by Keaton and Parker, make this an unmissable Christmas treat, gradually revealing everyone’s true character and motivations. It makes one wonder why writer/director Thomas Bezucha hasn’t had more success. Bit of a modern seasonal classic. Worth your Christmas Eve.