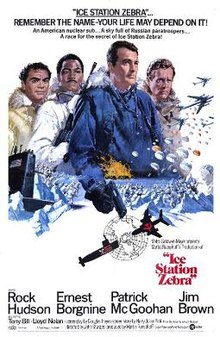 We operate on a first name basis. My name is Captain. Commander James Ferraday (Rock Hudson) captain of the American nuclear attack submarine USS Tigerfish (SSN-509) is ordered by Admiral Garvey to rescue the personnel of Drift Ice Station Zebra, a British scientific weather station moving with the ice pack. However, the mission is actually a cover for a classified assignment and he is obliged to take on board a British intelligence agent known only as ‘Mr. Jones’ (Patrick MacGoohan) and a U.S. Marine platoon; while a helicopter brings them Captain Anders (Jim Brown). The sub is also joined by Boris Vaslov (Ernest Borgnine) a Russian defector and spy who is a trusted colleague of Jones. As they try to break through the ice near the Orkney Islands when approaching the last position of ICZ the sub floods in an act of sabotage and it’s retrieved – just. But Lt. Mills (Murray Rose) is killed.  Ferraday suspects Vaslov and Jones suspects Anders. Ferraday orders the Tigerfish to surface and they find the weather station in ruins, the personnel nearly dead and Jones and Vaslov are soon discovered to be looking for something – a capsule, valuable to both sides in the Cold War, because it contains film of missile sites … I’ve saved a lot of lives by teaching men to jump when I speak. Notoriously the favourite film of one Howard Hughes, if ever there were a time to watch a long movie about the Cold War (actualised in freezing temperatures)… it’s now. I hadn’t seen this since I graduated from Jennings and Billy Bunter books to the oeuvre of Alistair MacLean aged  11 or thereabouts, so it’s both a time-warp exercise (when times were good!) and a deviation from a less visible issue tearing at the world’s synapses. (It makes one vaguely nostalgic for good old-fashioned political intrigue). There’s a deal of nudge-wink dialogue of the sticking torpedoes up spouts variety but the also the odd tart line such as Hudson grumbling at a nervous sailor’s prayer, Do you mind son, we’re trying to think.  Hudson is fine as the mariner under pressure but MacGoohan is particularly good in the most interesting role. Alf Kjellin impresses in his necessarily short sequences as Ostrovsky, the head of the Russian paras and it’s nice to see legendary footballer Jim Brown as Anders as well as actor/producer Tony Bill playing the quite showy role of Lt. Walker. Borgnine is much as you’d expect as a villain of sorts, a part intended for Laurence Harvey. There are some good setpieces centering on jeopardy – when the sub floods;  when some men fall into a crevasse once on icy territory; the tussle between Jones and Vaslov at the staion; and the final clincher which is literally a cold war shootout.  There are some clunky visual effects particularly in the latter stages but there are some fantastic underwater scenes too and the atmosphere is well sustained. It gains a frisson of recognition from knowing it’s based on two real incidents that apparently took place a) in 1959 near Spitsbergen, in Norway, involving a CIA/USAF strategic reconnaissance satellite called … Corona!;  and b) a few years later when two American officers parachuted to an old Soviet weather station.  Michel Legrand’s score is particularly effective in a film constricted by those claustrophobic physical locations and then there are those limitations imposed by all that political and generic roleplay. Adapted by Douglas Heyes, Harry Julian Fink and W.R. Burnett. Directed by John Sturges, who was responsible for the earlier MacLean adaptation, The Satan Bug.  I chose my side out of conviction not by accident of birth.

In between paying the bills, dealing with people, learning stuff, surviving illness, being distracted and getting through the day, everyone is trying to figure out what we are, why we are here and all that good stuff. There are many of us who would leap at the chance of getting off the Earth and into the galaxy for a bit. No?! Ellie Arroway (Jodie Foster) has been trying to make contact with people since she was a kid and her father (David Morse – what an apposite name) supplied her first with radios then telescopes and now that she’s an orphaned adult she’s a hugely important research scientist with SETI battling for funding until she can finally make contact with extra-terrestrial life:  people on Earth are just not as fascinating, when you get down to it. And funding’s a bitch as far as getting the Government to back you. The publicity attaching to her private project when static is finally revealed to be the first ever TV pictures being beamed back to Earth (Hitler at the 1936 Olympics) – along with plans to build a bloody huge machine for goodness knows what purpose – elicits scepticism, terror and hostility, especially from the religious nuts. She argues with theologian Palmer Joss (Matthew McConaughey) about the differences between facts and articles of faith and the film is really a disquisition on the politics of belief. She misses out on the first supposed opportunity to travel to meet the alien life forms, in favour of her game-playing boss David Drumlin (Tom Skerritt); while the original project is actually being backed by a reclusive billionaire SR Hadden (John Hurt) who has his own very personal reasons. Science versus religion is the heart of this superior production from Carl Sagan’s novel which he based on a story devised with his wife Ann Druyan, originally a treatment for a film at Warners. It was adapted by James V. Hart and Michael Goldenberg and directed by Robert Zemeckis. Foster is perfectly cast in this story of grim determination. If you’ve been to Cape Canaveral you’ll wonder at the possibilities, as much as you laugh at the rockets and paraphernalia that seem to be made from egg boxes and tinfoil. But all it takes is a leap of faith … Marvellous, in every sense.

Adapted by Nelson Gidding from Michael Crichton’s bestseller, this posits the idea that a satellite that has landed in Piedmont New Mexico was carrying an alien pathogen capable of causing mass casualties – everyone in the tiny township is dead. The scientists from Project Scoop are called in and find two people touched but still alive – a baby and an old man, who they remove to a lab. The researchers have to be decontaminated and then it’s a matter of identifying whether it is in fact an alien bacterium that is being launched on the earth’s population and it’s a race against time before a solution is found … Where you stand on this film’s success depends on your tolerance for old technology albeit with great effects for the era, devised by Douglas Trumbull who’d made his name doing 2001. The other issue is the uninteresting nature of the leads – perhaps casting Arthur Hill, James Olson, David Wayne and Kate Reid (a man in the source novel) was to ensure that your attention was focused on the story so that the issues of government readiness for such a potential catastrophe or alien invasion, secret projects (the left hand scientist doesn’t know what the right hand scientist is working on) and the nature of the storytelling itself are foregrounded. It’s told documentary fashion, with several interesting split screen effects and a ticker telling us what happens each day. Each specialist brings something different to the Wildfire project with their foibles and strengths exposed as things become exponentially problematic and the clock is ticking on the nuclear device should there be a containment breach – and everyone now knows that whatever this is it’s airborne and is too big to be a virus. Robert Wise directed a film that is very much a product of its time but with some astute lessons about how to deal with foreign invasions, germ warfare and what to do when your chief researcher experiences absence epilepsy and makes the wrong finding.The kind of film that makes you want to go back to the books to look at how pH range functions.