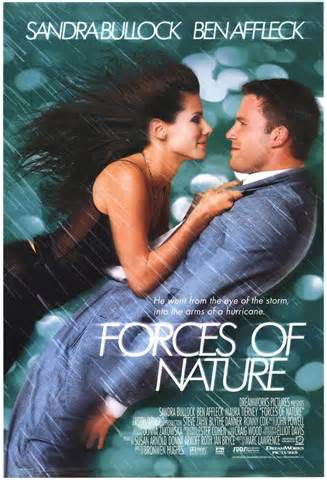 A hapless man on the eve of marriage meets a female accident waiting to happen. Sound familiar? It’s a recipe for two great screwballs – Bringing Up Baby and its homage, What’s Up, Doc? two of my personal fave raves. Here we have Ben Affleck as Ben Holmes, blurb writer, about to marry Maura Tierney, when a gull flies into the fuselage of his plane from NYC to Savannah and with flights grounded due to a hurricane he hitches a ride with quirky Sarah Lewis (Sandra Bullock). Calamity follows disaster as the trip gets progressively more complicated meanwhile fiancee Tierney as Bridget is stuck with her parents who she finds living apart and rediscovers a childhood boyfriend has grown into a romantic hunk with a penchant for terrible 80s songs. There’s a night in jail, a bus ride with old folk en route to Miami, the best man turns up with the maid of honour and all manner of misunderstandings and social faux pas occur. Are you one of those who think every road trip is a psychological journey?! Yup, a bit of that runs through this … But! There’s some very sharp dialogue and Bullock and Affleck are both so young and appealing:  when did everyone get so old?! Written by romcom maestro Marc Lawrence, who would team up again with Bullock for the Miss Congeniality films and Two Weeks Notice, this is directed by Bronwen Hughes who had made the wonderful kids’ film Harriet the Spy but hasn’t done enough feature work since (and we do like Stander!) What’s not to like?