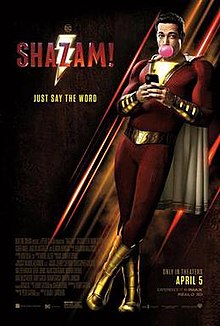 Gentlemen, why use guns when we can handle this like real men? All 14-year-old Billy Batson’s (Asher Angel)has to do is shout out one word to transform into the adult superhero Shazam (Zachary Levi). Still a kid at heart, Shazam revels in the new version of himself by doing what any other teen would do – have fun while testing out his newfound powers even as he searches for his birth mother while living in a new foster home where he is befriended by Freddy (Jack Dylan Grazer). But he’ll need to master those powers quickly before the evil Dr. Thaddeus Sivana (Mark Strong) can get his hands on Shazam’s magical abilities because Sivana was rejected by Wizar Shazam (Djimon Hounsou) long before Billy entered superhero terrain... Heroes fly. And who doesn’t want people to think they’re a hero, right? But invisibility, no way. That’s pervy. Spying around on people who don’t even know you’re there. Sneaking around everywhere. It’s a total villain power, right? Signs that all is not altogether lost in the DC Universe following some Batman-related disappointment, with a family-oriented fantasy outing that has to wait until the conclusion to give our hero a name because in the klutzy nomenclature of caped crusaders he was originally called Captain Marvel. Oh yes. And yet that’s okay because this is all about finding your identity and this rites of passage origins tale is finally all about a superhero’s journey – to his mother and to himself. Relatively lo-fi it might be in comparison with some of the heavy hitters of its type but it has a kind of Saturday morning TV quality to it – likeable, easy on the eye, relatable (!) fun even if it seems in some scenes that Strong is in a different film. There’s a nice Rocky homage in a story basically straight from the Big playbook whose message is that your true family is not necessarily the one you’re born into. Written by Henry Gayden and Darren Lemke based on characters created by Bill Parker and C.C. Beck. Directed by David F. Sandberg.  You have been transformed to your full potential, Billy Batson. With your heart, unlock your greatest power MM#2550

That’s poetry, not proof. It’s 1927. The Magical Congress of the USA is transferring Gellert Grindelwald (Johnny Depp) to be tried for his crimes but he escapes with the aid of his associate Abernathy (Kevin Guthrie). In London, Magizoologist Newt Scamander (Eddie Redmayne) encounters Leta Lestrange (Zoë Kravitz) an old pure-blood classmate from Hogwarts who has always been somewhat disturbed and is now engaged to Newt’s brother Theseus (Callum Turner), who works in the Auror office at the Department of Magical Law Enforcement. Newt turns down the request to find Credence Barebone (Ezra Miller) in Paris but Albus Dumbledore (Jude Law) persuades him to change his mind because Grindelwald is searching for Credence in order to help him implement a New World Wizarding Order … She has eyes just like a salamander. The JK Rowling franchise trundles on and it gets off to a speedy start, with Grindelwald assuming someone else’s identity and making good his escape. This triumph of production design and effects has lots of things to recommend it, not least big plot moves in a heavily stuffed story that’s laced with humour and irony. It’s based on the pull of family ties – brothers, sisters, the need to know your true identity – and that’s what balances a fun adventure that has a lot of good moments, a more rounded and sympathetic Newt and a great sense of jeopardy from Depp as the deranged proto-fascist albino seeking to elevate wizards above muggles. Familiar faces, well developed characters, a lot of narrative threads and a lot more to come. Adapted by Rowling and directed by David Yates. We were closer than brothers