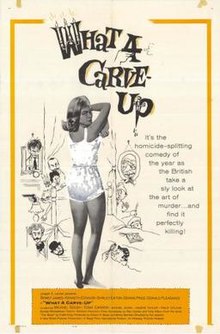 Aka No Place Like Homicide. One thing is certain – this is only the start. When wealthy recluse Gabriel Broughton dies of fright his heirs are summoned to his isolated country mansion Blackshaw Towers for a reading of the will. Then they are killed off, one by one and the nearest telephone is in the village … If he thinks I’m going to wait here and wind up in a deckchair on the lawn he’s got another thing coming. Adapted from Frank King’s novel The Ghoul by eminent British farceur Ray Cooney and Tony Hilton (they had co-written The Hand the previous year), this is an opportunity for Carry On regulars Kenneth Connor and Sid James to essay a pleasing Laurel and Hardy act (including a shared bed) as proofreader Ernest (nephew of the deceased) and his bookmaker roommate Syd, attending as his legal advisor. They are accompanied by pretty Linda (Shirley Eaton) a nurse, whom Ernest fancies; Ernest’s cousin Guy Broughton (Dennis Price) an ex-Army officer with an alcohol problem; Guy’s grasping sister Janet (Valerie Taylor); their father Doctor Edward (Michael Gwynn); their batty aunt Emily (Esma Cannon); solicitor Everett Sloane (!!) (Donald Pleasence); and the butler, Fisk (Michael Gough). It plays with all the notions of the haunted house and might remind some of Clue but is mainly a showcase for some good slapstick and mild innuendo which might still raise eyebrows. Genial fun performed by a very game ensemble with pop star Adam Faith turning up in the final sequence, which is explicitly used by author Jonathan Coe in his titular satirical homage to the film. Produced by Robert S. Baker and Monty Baker and directed by the brilliant documentary maker Pat Jackson. Syd, look! French Impressionists – Rembrandt!

I want him. I wanted him from the first moment I ever saw him. Mystery writer Janet Frobisher (Bette Davis) lives in Yorkshire and has been separated for years from her husband, a man with a criminal past. Her nearest neighbour is nosy veterinarian Dr. Henderson (Emlyn Williams). Janet has been having having an affair with Larry (Anthony Steel) who is years younger than her and he just happens to be engaged to marry her secretary Chris (Barbara Murray). When her estranged husband unexpectedly appears, Janet poisons him by administering medication given to her by Dr. Henderson for her horse. One of the deceased man’s criminal cohorts George (Gary Merrill) arrives as she’s preparing to dispose of the body in the local lake. When Chris and Larry arrive at the secluded house, the mysterious man, who has assisted her with her scheme, impersonates George, the long-absent spouse of Janet and Chris learns of the affair between Janet and Larry. When George kills her beloved horse Fury she sends him after Chris in an unsafe vehicle left at her front door by Henderson. He crashes, but survives and she determines on revenge … The night air teems with unexpected guests. Sounds like Shakespeare but isn’t. With additions to Val Guest’s screenplay by actor/playwright Williams (whose credits include The Corn is Green), this is a stage adaptation from Leslie Sands’ play Deadlock whose origins remain somewhat despite efforts to open it out and it lacks the visual panache in interiors that Hitchcock would manage to demonstrate with his take on Dial M for Murder. For all that, Davis bristles as a barnstorming man magnet, delighting in the viciousness of her mystery writer role and the woman’s insatiable desire for sex with her secretary’s fiancé. The barbs fly. Of course the second pairing of Davis and (now husband) Merrill is worth watching a year after they met and seemingly enacted the main couple’s relationship on All About Eve:  here there is real hatred between the two. She relishes the chance to play nasty and her manic laugh at the highly ironic conclusion is filled with gleeful appreciation, a creator of mystery entrapped by the machinations of her own deadly plot. We see some of the ingredients for Baby Jane right here. This is a narrative of barely suppressed, sometimes shockingly overt, violence and it’s unique in the canon of her work for that reason. This interesting instance of British film noir was produced by Douglas Fairbanks Jr. who spent a number of years in the UK making independent movies and it was directed by Irving Rapper who had made the classic Now, Voyager with Davis a decade earlier. Shot on location in Yorkshire’s West Riding and at Nettlefold Studios by Robert Krasker, best known for his work on The Third Man. There’s an extremely witty use of Hoagy Carmichael’s Stardust on the soundtrack.  Out of evil cometh good. That is, occasionally