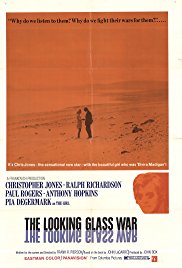 I’ve never been a spy before. It will be a new experience for me.  Polish defector Leiser (Christopher Jones) is lured into the world of espionage by a shadowy adjunct to MI6 run by Leclerc (Ralph Richardson) and Haldane (Paul Rogers) with the promise of British residency so that he can see his pregnant girlfriend (Susan George). Trouble is she’s aborted the baby and he drowns his sorrows with his training operative John Avery (Anthony Hopkins) before entering East Germany to clarify if blurred photographs from Hamburg are proof of a missile site. He pairs up with Anna (Pia Degermark) who wants out from the Iron Curtain and together they embark on a treacherous undertaking with high risks and mixed results … Never lean on your opponent.  Never lose your temper.  And why fight over a knife when there’s a gun under your arm? This adaptation of John le Carré’s novel by writer/director Frank Pierson starts with an intriguing encounter at an airport which winds up with a roadside death. Accident? This downbeat deconstruction of the spy’s life continues in the vein of The Spy Who Came in From the Cold and its satirical intent is conveyed in that first sequence – the spy can’t get taxi expenses and loses the film he’s paid a pilot to smuggle, killed by a camper van sliding along the snowy road. The author claimed it’s the most accurate depiction of his own experiences in espionage – including a misplaced longing for the glory days of WW2, utter incompetence and the futility of much intelligence activity. However the tone of anti-nostalgia in this story of The Department’s ineptitude is sacrificed for a more straightforward (and duller) exposition. The classic character of George Smiley is dropped from the source novel. There are plenty of incidental pleasures however, not least the cinematography by Austin Dempster; Jones’ gear (like a forerunner of Robert Redford’s getup in Three Days of the Condor), all peacoat and steel-rimmed mirror shades; a rare performance by Elvira Madigan herself, Degermark; and a score that is both modish and interesting from Wally Stott (responsible for arranging Scott Walker’s first three solo albums) who changed sex two years later and became Angela Morley. Morals are a bitch on heat 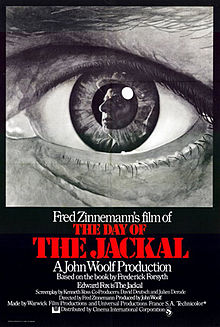 Frederick Forsyth was my gateway drug to faction:  novels based more or less truly on historical incident. You could trust him because he had a long history as a respected and conscientious journalist. And what a way with plot! This story of a 1960s assassination attempt on the despised French President Charles de Gaulle by disgruntled members of the exiled OAS (the militant underground) would seem to have nothing much going for it on the surface:  the outcome, for one. But the trick here is brilliant.  These patriots hire a British hitman (Edward Fox) who is completely unknown to the authorities. And as he gathers the materiel required for such an audacious once-in-a-lifetime évènement and removes all the human obstacles in his path, we realise, at the foregone but nail-biting conclusion, that we know absolutely nothing about him at all.  This is narrative sleight of hand at its best. And it is crucial to the tension that the ruthless professional Jackal remains a complete enigma, a mystery at the heart of a brilliantly staged action thriller with a great supporting cast. His nemesis proves to be a Parisian police detective (Michael Lonsdale) determined to root out this threat to democracy.  Adapted by Scottish-American screenwriter Kenneth Ross who would perform the same miracle with The Odessa File. Gripping outing by director Fred Zinnemann who meshes his predilection for documentary-style realism with all the tricks of a cinema of attractions. Flawlessly executed. 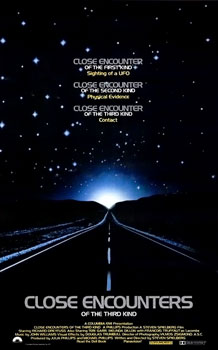 No film is made by one person. Paul Schrader, David Giler, Hal Barwood, John Hill, Jerry Belson and Matthew Robbins all contributed to the screenplay in one way or another but it had one originating sensibility and intelligence – that of Steven Spielberg. He twisted and turned their various interpretations of his story to something that was and remains ineluctably his:  sceptical but imaginative and wondrous. It starts in a desert where planes that disappeared in WW2 are discovered. Then a little boy Barry (Cary Guffey) runs after a spaceship in Muncie, Indiana where there’s a power outage and electric lineman Roy Neary (Richard Dreyfuss) gets major sunburn from a flying saucer at a railroad stop. The witnesses to the ice cream-shaped vehicles zipping along the rural highway think they’re going crazy. Roy starts sculpting mashed potato at table, leading his children to cry and his wife (Teri Garr) to leave. He then takes garden soil into the living room and starts to build. Meanwhile, Barry’s mom (Melinda Dillon) sketches a mountain, repeatedly… The Devil’s Tower is where the alien encounter is planned by French scientist Lacombe (director Francois Truffaut) along with the US Army and other government agencies.The film was released before Spielberg believed  it was finished – Columbia was under pressure for a hit and they got it.The additions (some new scenes on top of deleted scenes) entirely expand the premise and the later Director’s Cut still retains the arc but is somewhat darker. Even if you believe (as I do) that most of the essential films were made between 1955 and 1965, this is monumental filmmaking. Once seen, never forgotten.

How much do we love Tom Cruise? So few actors (or actresses) that are truly likeable have come up in the last … twenty years? Likeability can’t really be manufactured or they’d all be at it. It’s depressing to see how many cookie-cutter performers are out there and while I’m aware studio generic fare and bad writing are contributing to the problem, who can truly say that anyone can match Cruise, Depp, Downey or Hanks? When he turned to producing and wanted to take the old TV show to the big screen, everyone thought he was mad. Until The Fugitive had the tills pinging. So he assembled a crack team: Brian De Palma to direct, and Steven Zaillian, David Koepp and Robert Towne on writing duties. Stephen Burum DPing, U2 reworking the theme as an electronic Top 10 hit. Cruise is Ethan Hunt, prime suspect in the apparent murders of his own IMF team while on assignment in Prague where the first two stunning set-pieces are staged. He teams up with two other disavowed agents, Ving Rhames and Jean Reno and they infiltrate CIA HQ in Langley in a sequence that had me breathless the first time I saw it. The film’s climax on the top of a Chunnel train is stunning. It’s an expertly plotted thriller, all bone and sinew, nothing extraneous. Nobody puts a foot wrong in the first of what has become an incredibly satisfying franchise with Cruise having the smarts to hire directors who have a kinetic, fizzy visual sense. After 20 years, it’s still brilliant. I write about it in my book about legendary Hollywood screenwriter Robert Towne: https://www.amazon.co.uk/ChinaTowne-Elaine-Lennon-ebook/dp/B01KCL3YXQ/ref=sr_1_2?ie=UTF8&qid=1471307491&sr=8-2&keywords=elaine+lennon

It’s surely a sign of an unhealthy cinema summer when the audience is going in droves to an exceedingly mediocre action movie.Tony Gilroy’s writing smarts (he knew what to do with Ludlum’s brilliantly tricksy emblematic character) are gone. In their stead is a cobbled together action-chase sequence from returning director Paul Greengrass and editor Christopher Rouse that trades on an Oedipal-type scenario with Bourne’s dad linked to the original Treadstone, uncovered by a very odd looking Julia Stiles who’s in league with a kind of brutal Julian Assange skinhead character. A Facebook company run by the twisty Aaron Kalloor (Jewish … Indian?!) that appears to have done a deal with the CIA for client info is repeatedly juxtaposed with faded images of Pop’s cryptic comments before he was blown up.Cyber memories are made of this. Ho hum. So 2010. We commence with bare-knuckle fighting, protests in Greece and fetch up in Las Vegas with a major street scene starring ugly baddie sniper Vincent Cassel while a bloodless performance by Alicia Vikander as right hand woman to the CIA’s Dewey (Tommy Lee Jones) is enough to make your teeth itch. Political correctness is just plain irritating and to make everything even worse is the horrendous cinematography by Barry Ackroyd. It’s like Jeremy Corbyn’s wet dream. Free non-existent houses and jobs for everyone! Yawn. Bring back Tom Cruise. Or Pierce Brosnan! For a real ReBourne.Please. 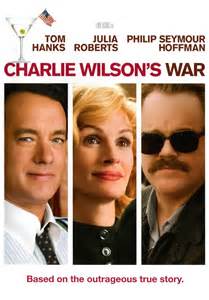 What a pleasure it is to watch actors at the top of their game performing a humdinger of a screenplay  (by Aaron Sorkin) directed by a man who knows how to handle material (the late Mike Nichols). George Crile’s titular book documented the unknown team behind a covert op in Afghanistan in the 1980s to help the mujahideen against the Soviet invaders. Hanks is brilliant as the party-hard Texan Congressman with a team of hotties (including Amy Adams), Seymour Hoffman is the hilariously touchy CIA undercover guy keen to go in and Julia Roberts is fantastic as the multimillionaire bankrolling them to assist the locals. It’s a serious-minded, highly enjoyable film about a subject that history has judged … To quote Wilson, ‘we fucked up the end game.’ No shit, Sherlock.

This begins like a rattle of machine gun fire and never lets up, from the white on red title to the sensational series of action sequences that emboss a very modern fairytale. Hanna (the extravagantly gifted Saoirse Ronan) is being trained as a killer by her dad, incognito agent (the fantastic Eric Bana) when people come looking for them in their Nordic hideout. She goes on the run after escaping her captors led by Cate Blanchett. The trans-Europe chase takes place in spectacular fashion, hiding with an English family on holiday, having regular teenage experiences, then the chickens coming home to a grisly roost in Grimm’s playground in Berlin …This came from the brain of Seth Lochhead who did the screenplay with David Farr. It’s about breeding children in labs, family, friendship, squaring accounts, training the military and nightmarish reality versus storytelling. Ronan asked her Atonement director Joe Wright to take it on. It is spectacular from start to finish with an amazing soundtrack by The Chemical Brothers. One of my favourite films of the last decade. Really something. (Maybe you shouldn’t watch if you’re the product of IVF. Just saying).