I wanna know what the fuck this is all about! I gave you 48 hours to come up with somethin’ and the clock’s runnin’! Renegade San Francisco cop Jack Cates (Nick Nolte) pulls bank robber Reggie Hammond (Eddie Murphy) from a federal prison on a 48-hour leave to help him capture Hammond’s old partner, Albert Ganz (James Remar). After escaping from a prison work crew where he shot up two of the guards, Ganz is on a killing spree around San Francisco, on the trail of half a million dollars that went missing after one of his robberies. The cocky Reggie knows where the money is, but spars with the hotheaded Jack as he enjoys his temporary freedom…  I’ve been in prison for three years. My dick gets hard if the wind blows. The great screenwriter turned director Walter Hill surrenders full tilt boogie to the action genre and makes one of the best films of the Eighties with this tough buddy movie starring one of the best double acts to ever appear on screen:  Nolte’s gruff cop to Murphy’s fast-talking crim provides an exercise in contrast and juxtaposition – straight/funny, white/black, law/disorder- with their fast prolix exchanges both profane and meaningful as they find each other on the same side. The scene in the redneck bar is justly famous but the tone and thrust of the entire muscular narrative is warm and funny, characterful and plain, overtly racist and sexist, in a constant battle of oneupmanship. This was Murphy’s big screen debut and it made him a star. It all plays brilliantly, with Remar making a return visit to Hill territory following The Warriors and the city of San Francisco provides the stylish stomping ground while Annette O’Toole is Nolte’s love interest, Elaine. Written by Roger Spottiswoode, Hill & Larry Gross and Steven E. DeSouza, this is the basic cop-buddy template, the mother of all action comedy. Now, get this! We ain’t partners. We ain’t brothers. And we ain’t friends 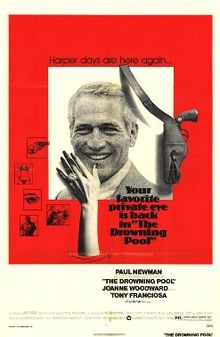 Swimming’s a good way to relax but I know a better way. LA based private detective Lew Harper is hired by old flame Iris Devereaux (Joanne Woodward), who is being blackmailed about an extra-marital affair she says never happened. He travels down to Louisiana to investigate, but things take a turn for the worse when her mother-in-law (Coral Browne) is killed and her nymphet daughter Schuyler (Melanie Griffith) appears to be involved with the family’s disreputable ex-chauffeur Reavis (Andrew Robinson) who Iris believes is responsible for the blackmailing … I ran a check on you, Mr. Harper. You are not stupid. Adapted by Tracy Keenan Wynn, Walter Hill and Lorenzo Semple Jr. from Ross Macdonald’s titular 1950 novel, this rather laidback followup to Newman’s previous outing as Lew Harper a decade earlier relocates him from his familiar California setting and the New Orleans and Lafayette backdrops provide an easy atmosphere for this most likable of PIs. Beyond the visual attractions of the bayous and plantation home shot by Gordon Willis, there’s the spectacle of real life husband and wife Newman and the marvellous Woodward sharing screen time, Griffith as the jailbait daughter with the squeaky voice, Murray Hamilton as crazed oil magnate J.J. Kilbourne, Anthony Franciosa as Police Chief Broussard and Richard Jaeckel gets some very good moments as a corrupt police officer. You’ll recognise Robinson as the shooter from Dirty Harry. Less deftly plotted than Harper, it’s rounded out with a score by Michael Small arranged around the liberal use of the modern classic, Killing Me Softly, an exceedingly apt choice considering the denouement. Directed by Stuart Rosenberg. Harper, you’re not such a tough guy 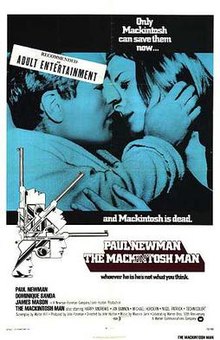 Put a bag over my head. I’ve been in prison for 15 months! Secret agent Joseph Rearden (Paul Newman) poses as an Australian jewel thief and is quickly convicted of stealing £140,000 of diamonds and imprisoned in order to infiltrate an organisation headed by Home Secretary Sir George Wheeler (James Mason) who organises Rearden’s escape along with that of MI6 intelligence officer Slade (Ian Bannen) who was gaoled as a Soviet mole … I don’t know about you, Slade; I’m not ready for death. The rest I’ll drink to. Adapted by Walter Hill (along with director John Huston and William Fairchild) from Desmond Bagley’s The Freedom Trap, this starts out quietly and continues that way for some time – tricking the susceptible viewer into believing that Rearden himself has been tricked by MI6 into taking the fall for a jewel heist and for more than a half hour it’s a prison movie. However the sleight of hand is revealed as it becomes clear Rearden has gone into deep cover to smoke out a dangerous organisation in this Cold War tale. Of course you will recognise the contours of the real-life story of George Blake, whose daring prison escape is the stuff of legend. For an action film and spy thriller this is a work of smooth surfaces and understated performances, especially by Newman, enhanced by the cinematography of the great Oswald Morris and a beautiful score by Maurice Jarre. The locations around Galway – Oranmore and Roundstone – were local to director Huston who spent much of the Fifties onwards at his house St Cleran’s. The palpable anger and keen sense of duty comes in fits and starts, usually at the conclusion of realistically staged action sequences, including a chase across an Irish bog and using banged up cars rather than Aston Martins. There are also some small gems of supporting appearances – Leo Genn as prosecuting counsel, Jenny Runacre as Gerda the nurse, Noel Purcell and Donal McCann in the Irish scenes. There are also scenes of misogyny and violence (even against a dog) that might shock in this more politically even-handed climate. The strangest character Mrs Smith, played by Une femme douce herself Dominique Sanda, gets an incredible payoff.  You might even say she has the last word. The cool, straightforward approach to treachery, duplicity in the modern state and something of a twist ending just raises more questions, making this a palpable pleasure, a film which tells one simple truth – trust nobody. Produced by John Foreman who had a company first with Newman and then made a cycle of films with Huston. Our deaths would mean little or nothing to anyone, anywhere – only to ourselves