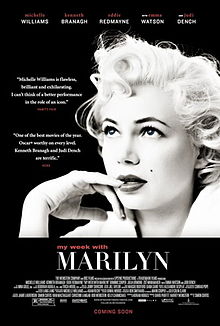 Marilyn Monroe took acting very seriously and trained with several coaches throughout her career – she was nervous as a cat about performing and terrified about getting her lines right. She was dyslexic, had Meniere’s disease and and suffered stage fright to beat the band.Her capacity to remember lines was practically non-existent. It drove co-workers crazy – the more takes she did in her quest for perfection, the better she got. And they dropped from exhaustion. She fled Hollywood to take more control of her roles and set up a production company with Look photographer Milton Greene and their first film was Bus Stop – finally Marilyn can act, the critics said. She had wound up at the Actors’ Studio inadvertently following the death of Constance Collier whom she had been training with in NYC. The association caused untold complications in her life. Then a project arose with Laurence Olivier – an Edwardian comedy of manners by Terence Rattigan, The Sleeping Prince. Olivier and Vivien Leigh had played it onstage. Leigh was too old to play the chorus girl on film and Monroe wanted to be taken seriously so it became a joint production of both of their companies with Olivier starring and directing (that was inadvertent, the result of a misunderstanding that everyone was too polite to point out). Monroe rolled up for the English shoot with new husband playwright Arthur Miller, Greene, publicist Arthur Jacobs and acting coach/sycophant Paula Strasberg, Lee’s wife  …  Colin Clark was the son of Olivier’s friend Kenneth Clark and as a new unemployed graduate needed a job. He got taken on as Third Assistant Director on the film that became The Prince and the Showgirl and kept a diary which he finally published as The Prince, The Showgirl and Me in 1995. He later wrote a memoir, My Week With Marilyn, and these two volumes are combined here by Adrian Hodges with a touch of creative licence, coyness and diplomacy:  Clark’s (and Olivier’s) views of Miller (Dougray Scott here) in particular were scathing and Clark’s real-life sexual inclinations were more worldly than those exhibited in the personage of Eddie Redmayne. Michelle Williams gets the poisoned chalice role but manages at times to exquisitely portray the plight of the most famous woman in the world trying to get along in a new marriage with a man clearly using her and a cast and crew (led by Kenneth Branagh as Olivier) who appeared to despise her (they trashed her leaving gifts, not that we see that in this British production). Dame Sybil Thorndike (Judi Dench) famously said that Monroe was the only one among them who knew how to act for the camera while Olivier ranted at Clark that ‘Trying to teach Marilyn how to act is like trying to teach Urdu to a badger.’ Seeing her luminous performance and his own overacting in rushes nearly finished him and stopped his desire for directing (he eventually made one just more feature and a TVM!). Clark stated that Olivier was a great actor who wanted to be a film star while Monroe was a film star who wanted to be a great actress. According to his memoir he told her this in order to allay her fears in the hostile environment in which she found herself adrift. Who knows how much of this is true? It’s all rather unlikely. It makes for a good story though. Director Simon Curtis manages to get the balance of despair, humour and pathos into this on-set romance and it’s a testament to all the talents involved that it’s more insightful and touching than exploitative. 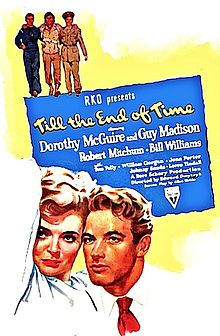 Guy Madison (to whom Canadian avant gardist Guy Maddin owes his moniker) is the young Marine home from WW2, a typical draftee after Pearl Harbour and college dropout, whose parents welcome him back but stop him from discussing his experiences. He can’t settle down to civilian life and hangs out with war widow Dorothy McGuire while second banana star Robert Mitchum’s head injury is causing outrageous headaches and boxer Bill Williams can’t deal with losing his legs. This study of PTSD is part of a wave of films that tried to explain the difficulties of post-war adjustment. Los Angeles was like most major cities subject to a crimewave committed by vets and this middle-class take on malaise is mostly decent stuff, and the propaganda aspect is to be expected, adapted from the Niven Busch novel They Dream of Home by Allen Rivkin and directed by Edward Dmytryk. It ends happily in a fistfight started by a bunch who sat it out and call themselves patriots. This was overshadowed by the Academy Award-drenched The Best Years of Our Lives but is worth a watch, particularly for McGuire.The theme tune, derived from Chopin’s Polonaise Opus 53, was a huge hit for a young Perry Como.