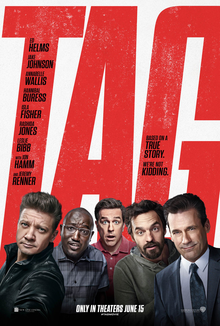 There are no winners. Only not losers.  Hogan ‘Hoagie’ Malloy (Ed Helms), Bob Callahan (Jon Hamm), Randy ‘Chili’ Cilliano (Jake Johnson), Kevin Sable (Hannibal Buress) and Jerry Pierce (Jeremy Renner) have been playing a game of tag every May for 30 years  – but Jerry’s never been It and his upcoming wedding (to which none of his friends have invited) provides the perfect setting to finally land the big fish. Or does it? He’s planning on retiring now and Hoagie tags Bob at his insurance company where he’s CEO and collars Chili mid-toke and Kevin at his psychiatrist’s in order to make one last attempt in their hometown of Spokane where Jerry runs a successful fitness business and his ninja-like agility still threatens to make it impossible … I will be so pissed if she didn’t have a miscarriage. Adapted from the Wall Street Journal story It Takes Planning, Caution to Avoid Being It by Russell Adams, this has an iron-clad concept that doesn’t quite work – somehow the innate madness and anger that occasionally surfaces in Helms’ character (and which is ultimately put down to illness – such sentiment has no place here!) doesn’t get ridden the way it ought. First-time director Jeff Tomsic has fun with the action sequences but the screenplay by Rob McKittrick and Mark Steilen needed something extra – at one point I kinda hoped it would be Preston Sturges, because the kind of antic frantic lunacy that this story suggests needs that sort of old-school zany style. The final twist turns into something else with Hoagie’s crazed tagalong wife Anna (Isla Fisher) letting loose – at last. Too late, I fear! You’re it. Poor planning. Poor execution