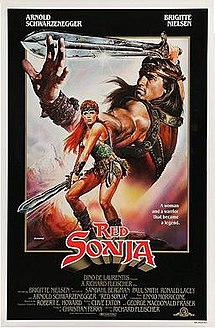 If you yield only to your conqueror then prepare to be conquered – Amazonian!  In the prehistoric Hyborian Age, power-hungry Queen Gedren (Sandahl Bergman) captures the priestesses guarding the Talisman, a mystical orb that created and can destroy the world. But one of the priestesses Varna (Janet Agren) escapes and seeks out her warrior sister, Red Sonja (Brigitte Nielsen), to warn her about Gedren’s plan for world domination. Lord Kalidor of Hyrkania (Arnold Schwarzenegger), the Talisman’s keeper, insists on helping Sonja, and though she scorns the assistance of any man, she soon gains respect for Kalidor’s fighting prowess…  I don’t need eyes to find you I can smell you at a hundred paces. From a lively, funny screenplay by George (Flashman) MacDonald Fraser and Clive Exton adapted from Marvel’s character Red Sonya of Rogatino (created by Roy Thomas), this is a gloriously silly swords, sanda(h)ls and sorcery romp with vengeful barbarian babe Nielsen basically engaging in very extended foreplay with sidekick Schwarzenegger, who thrusts valiantly throughout. There’s a lot of fun with young Prince Tarn (Ernie Reyes, Jr.) and his faithful manservant Falkon (Paul L. Smith) when the four team up to go after the talisman. With a vivid score by Ennio Morricone, this excapist fun moves like the clappers and is all satisfyingly done in 86 trim minutes – a lesson that could be learned by contemporary blockbuster bores. Directed by Richard Fleischer. This is the way I came in, you fool! 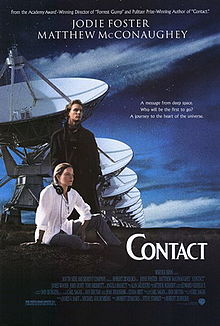 In between paying the bills, dealing with people, learning stuff, surviving illness, being distracted and getting through the day, everyone is trying to figure out what we are, why we are here and all that good stuff. There are many of us who would leap at the chance of getting off the Earth and into the galaxy for a bit. No?! Ellie Arroway (Jodie Foster) has been trying to make contact with people since she was a kid and her father (David Morse – what an apposite name) supplied her first with radios then telescopes and now that she’s an orphaned adult she’s a hugely important research scientist with SETI battling for funding until she can finally make contact with extra-terrestrial life:  people on Earth are just not as fascinating, when you get down to it. And funding’s a bitch as far as getting the Government to back you. The publicity attaching to her private project when static is finally revealed to be the first ever TV pictures being beamed back to Earth (Hitler at the 1936 Olympics) – along with plans to build a bloody huge machine for goodness knows what purpose – elicits scepticism, terror and hostility, especially from the religious nuts. She argues with theologian Palmer Joss (Matthew McConaughey) about the differences between facts and articles of faith and the film is really a disquisition on the politics of belief. She misses out on the first supposed opportunity to travel to meet the alien life forms, in favour of her game-playing boss David Drumlin (Tom Skerritt); while the original project is actually being backed by a reclusive billionaire SR Hadden (John Hurt) who has his own very personal reasons. Science versus religion is the heart of this superior production from Carl Sagan’s novel which he based on a story devised with his wife Ann Druyan, originally a treatment for a film at Warners. It was adapted by James V. Hart and Michael Goldenberg and directed by Robert Zemeckis. Foster is perfectly cast in this story of grim determination. If you’ve been to Cape Canaveral you’ll wonder at the possibilities, as much as you laugh at the rockets and paraphernalia that seem to be made from egg boxes and tinfoil. But all it takes is a leap of faith … Marvellous, in every sense. 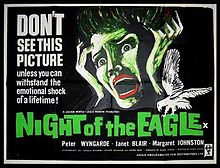 Aka Burn, Witch Burn! I do not believe. Those words, chalked across a blackboard by college psychology professor Norman Taylor (Peter Wyngarde) open this American production shot in England in 1961. (Wyngarde got the role by default when Peter Cushing chose to make Captain Clegg instead.) He then discovers that his wife Tansy (the estimable Janet Blair) has been casting spells for years and he begins to doubt precisely how he has achieved his career in academia, a hellhole for those in the know. As he persuades his wife to dismantle her creepy accoutrements, rivalries escalate, accusations mount, Tansy is in a trance, auditory hypnosis commences and the eagle above the college’s front door starts to look even more ominous… Scripted by Charles Beaumont and Richard Matheson from the New England-set campus novel Conjure Wife by Fritz Leiber,and directed by Sidney Hayers (there was a 1944 Hollywood version) this is an underrated supernatural outing about belief, an enchantment and black magic, and a memorable choice for All Souls’ Night.  Brrr….