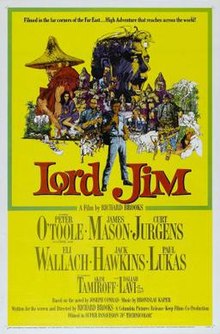 What storm can fully reveal the heart of a man? Midshipman Jim Burke (Peter O’Toole) becomes second in command of a British merchant navy ship in Asia but is stripped of his responsibilities when he abandons ship with three other crew who disappear, leaving the passengers to drown.However the Patma was salvaged by a French vessel. Disheartened and filled with self-loathing, Jim confesses in public, leading to his Captain Marlow’s (Jack Hawkins) suicide and he seeks to redeem his sins by going upriver and assisting natives in their uprising against the General (Eli Wallach)… The weapon is truth. Adapted from Joseph Conrad’s 1900 novel by writer/director Richard Brooks, this perhaps contains flaws related to the project’s conscientious fidelity to its problematic source. Overlong and both burdened and made fascinating by its pithy philosophical dialogue, O’Toole is another cypher (like T.E. Lawrence) burning up the screen with his charisma but surrendering most of the best moments to a terrific ensemble cast. The psychology of his character remains rather impenetrable. There are exchanges dealing with cowardice, shame, bravery, heroism, the meaning of life itself and the reasons why people do what they do – and the consequences for others. There is guilt and there is sacrifice, the stuff of tragedy, in a film bursting with inner struggle, misunderstandings, romantic complications and the taint of violence. Shot by Freddie Young, who does for the jungle what he did for the deserts of the aforementioned Lawrence of Arabia. When ships changed to steam perhaps men changed too 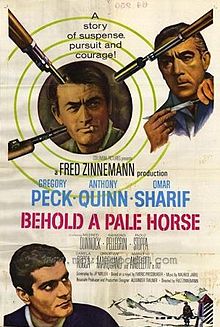 What is it they want? I’ve done enough. Screenwriter Emeric Pressburger wrote a novella about the aftermath of the Spanish Civil War entitled Killing a Mouse on Sunday. JP  Miller adapted it as Behold a Pale Horse (pace The Book of Revelations) and Fred Zinnemann (a director who purveyed an interest in men of conscience) took it to the screen. It was shot in southwest France but there was intimidation from the fascist government of Franco to the extent that Columbia Pictures divested its distribution arm in Spain afterwards and it wasn’t screened on US TV networks following intervention from Madrid. Gregory Peck and Anthony Quinn are reunited following The Guns of Navarone as protagonist/antagonist to each other 20 years after the cessation of hostilities. Peck plays former resistance fighter Manuel Artiguez  (loosely based on real-life Catalan guerilla ‘Zapater’) living in exile in Pau, the Basque region of France. Quinn is Vinolas, an officer in the Guardia Civil who has vowed to kill his enemy of longstanding. The young son Paco (Marietto Angeletti) of Artiguez’ former co-fighter arrives  in Pau to ask him to avenge his father’s murder – the Guardia Civil beat him to death to try and find out Artiguez’ hiding place. A young priest Francisco (Omar Sharif) is summoned to the deathbed in the hospital at San Martin of Artiguez’ mother (Mildred Dunnock) an atheist who nonetheless asks him to stop off en route to Lourdes to warn her son not to return to Spain or he will be killed. Francisco’s colleague in the priesthood has a brain injury from a bank robbery the Loyalists carried out so he himself is implicated in any action against the police. Paco warns Artiguez that his close associate in Pau, Carlos (Raymond Pellegrin) is in fact an informer who watched his father’s murder. The scene is set for a squaring of accounts and promises a standoff of epic proportions – Civil War has the terrible longlasting effect of cleaving even families asunder. The first part of the film has its focus on Vinolas and his quest for revenge and his marital issues;  then we are primarily in Pau with the unfolding events. This leads to a pacing problem. Sharif and Quinn meet and we hope for something as graceful as their parts in Lawrence of Arabia and it’s promising but not really as effective as you would wish. When Peck and Sharif meet across the border it’s really a high point as the men’s various takes on morality are parried. Vinolas is then in the background until the final cataclysmic balancing of the books.  There should be more equivalence between these two but it’s really only down to a taste in loose women. The drama is slow and rather like watching pieces being manoeuvred on a chessboard.  Shot in a wonderfully oily monochrome by Jean Badal (with whom Zinnemann purportedly did not see eye to eye) this is beautifully captured. The action however is distinctly lacking and the climax is not the one we want – a shootout which wraps a conclusion that is neither logically exact nor emotionally true. We have been led to believe that this is the post-war equivalent of One Last Job and it fails spectacularly due to a wrongheaded decision by Artiguez (and the creative team). Who puts an act of personal treachery above the common good and the prospect of political revolution? That’s the question.There’s a subtle score by Maurice Jarre which picks out single notes and chords and drum sounds in an unconventional fashion and there are nice supporting performances by Christian Marquand, Rosalie Crutchley and Dunnock.  This is one of several films by Zinnemann dealing with the phenomenon of fascism (and the resistance to it) in the twentieth century, a body of work which means he more than deserves the occasionally perverse accolade of auteur. It’s not his best film but it is a testament to his beliefs. A misfire, yes, but a fascinating one, with Peck mostly convincing and Quinn very good but it’s Sharif you’ll remember. Those eyes!