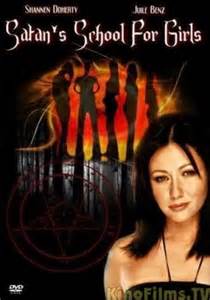 In the early 1990s, there were two cool girls:  Winona for the big screen, Shannen for the small screen (and they were both in Heathers!!!!).  Beverly Hills 90210 was an obsession! Brenda! Dylan! Hearts and flowers and heartache. Etc. And years later Aaron Spelling kept Doherty working including on this remake of a much-loved TVM made in 1973 (by himself and Leonard Goldberg, his producing partner) which starred two of his future Charlie’s Angels, Kate Jackson and Cheryl Ladd. The story is somewhat updated from the original screenplay by Arthur Ross, who had a terrific TV pedigree including 8 episodes of the fabled Alfred Hitchcock Hour. Here it’s Doherty playing the girl who suspects her sister’s death at a New England college is not the suicide the authorities claim so she enrolls there to find she may have died at the hands of a sinister Satanic cult called The Five (was Harlan Coben watching?!). It turns out that her particular magic could give the other cult members the power to take over the world. Bien sur (well, it was shot in Canada as some of the street signs indicate…). In order to lure her into their cabal all Hell literally breaks loose. Doherty was of course one of TV’s Charmed sisters (Prue) and this was made mid-stream those series she was in (she was replaced, eventually). It took me a while to recognise Taraji P. Henson (her eyes are different … ahem). The effects are pretty good but not enough to conceal the skeletal  appearance of Kate Jackson who re-appears as the dean in this version. As with Charmed, and The Craft, there was a spate of witchy movies and TV shows in this era but I’d love to see the original, directed by David Lowell Rich. One can but hope that the Horror Channel might retrieve it one of these dark nights. And hey, it’s Ms Doherty’s birthday tomorrow, 12 April:  Happy Birthday Cool Girl!