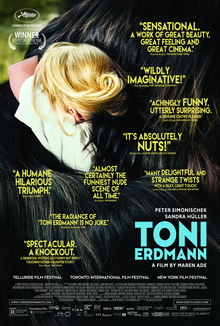 You have to do this or that, but meanwhile life is just passing by.  Corporate strategist Ines Conradi (Sandra Hüller) is busy at her job in Bucharest and reluctantly has to spend time with her estranged father Winfried (Peter Simonischek), a music teacher divorced from her mother, who apparently returns to Germany but instead adopts an outrageous disguise and poses as her CEO’s life coach, Toni Erdmann …  How are you supposed to hang on to moments? A rip-roaring German comedy? Surely you jest! In a way. This comedy drama slayed all comers a couple of years back and despite overlength (you wonder at times what Billy Wilder would have done with his rapier wit, wisdom and speed with such material) this hits so many truths with such mortifying behaviour and courage that you forgive writer/director Maren Ade’s liberties and go with the mad dad – as, eventually, Ines decides to do. This after all is a guy who didn’t even tell her his beloved dog died – and we find out about it when he lies on the dog’s bed in the garden. He gatecrashes her business functions and regales assorted bigwigs with tall and taller tales in a toupee and false teeth. When she lets go of her own inhibitions (not too many of them, to be fair, as the sex and drugs scenes prove) and goes with her father’s adopted persona, unleashing the beast within, you’d cheer if it wasn’t all done in such a low key, realistic fashion. Truly the difference between business and personal in this mansplaining environment is don’t show, don’t tell the truth. The naked team building scene is jaw dropping. And the performance of a Whitney Schnuck (sorry, Houston) favourite is a high point. For some. Intriguing stuff, with an undertow of loneliness rarely explored in cinema and so relatable to anyone who’s ever been embarrassed by their parents.   I don’t want to lose my bite

Romeo (Adrian Titieni) is a middle-aged doctor in a small Romanian town and father of a teenage daughter Eliza (Maria Victoria Dragus) who needs good results in a written exam to take up her place on a scholarship to Cambridge. He finds out from his mistress Sandra (Malina Malovici) who teaches at Eliza’s school that the girl has been assaulted on a building site at the school entrance where he drops her off every day. She’s narrowly avoided being raped but her wrist is injured and the headmaster wants to stop her taking part in the exam because she could have notes written on it – until Sandra intervenes. Then the police inspector investigating the attack suggests to Romeo that his daughter’s results might be improved if Romeo can find a liver for a corrupt customs inspector Bulai. Romeo discusses the situation with his wife Magda (Lia Bugnar) who doesn’t want him embroiled in the national disease of corruption. When he suggests the plan to Eliza she listens but doesn’t give him any response.  Eliza finds out about her father’s mistress and threatens to tell her mother – who already knows. While he tries to pursue her attacker and she attends a lineup in the police station during which one suspect shouts at her through two-way glass, prosecutors turn up at the hospital and start asking questions about Bulai …  Cristian Mungiu’s film is mundane in its detail (and its star) but nonetheless compelling as he traces an almost Kafkaesque story of a more or less regular guy dealing with a sequence of horrible events which he has worked so hard to help his young daughter avoid as he has plotted her escape to a more civilised life since she was born. She persists in taking her own path as he can’t even persuade her that her handsome older boyfriend Marius (Rares Andrici) who openly admits to having cheated at his own final exams watched as she was attacked  – he got a screenshot from surveillance cameras to prove it.  The lack of reaction when he finds out his teenage girl is not a virgin following the attempted rape is a lesson to showier filmmakers. This is an unexpectedly gripping family drama that moves with the relentlessly grinding pace of the ghastly bureaucratic society it depicts.