It doesn’t have huge stars or an immediate sense of a masterpiece. However the influence of the Gothic and what would come to be called film noir is all over this skewed tale of Americana made in 1942, directly after the United States entered World War 2.  Hitchcock was finally in the process of settling down and buying property, and he was making a film on location in a small Californian town, the epitome of Andy Hardy-ness.  Until Uncle Charlie (Joseph Cotten) comes to town and his namesake niece (Teresa Wright) begins to suspect that there’s a serial killer of wealthy widows in their midst … The constant sense of threat, the overwhelming fear that something bad will happen, is built into every scintilla of the film’s design.  Our sympathy for Uncle Charlie is cunningly transferred to his niece as his psychopathy is revealed.  Long thought to be the maestro’s favourite film (he demurred when asked to confirm) this was Hitchcock’s earliest sign of an interest in the double, a preoccupation that would herald Strangers on a Train, Vertigo, and the noirest noir of them all – Psycho. I have written a book about this film and you can get it here: https://www.amazon.co.uk/Girl-Who-Knew-Too-Much-ebook/dp/B01KTWF08U/ref=sr_1_5?ie=UTF8&qid=1476297954&sr=8-5&keywords=elaine+lennon. 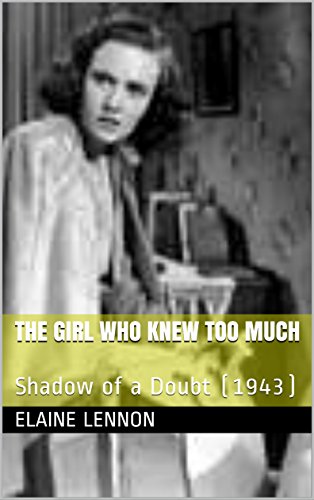